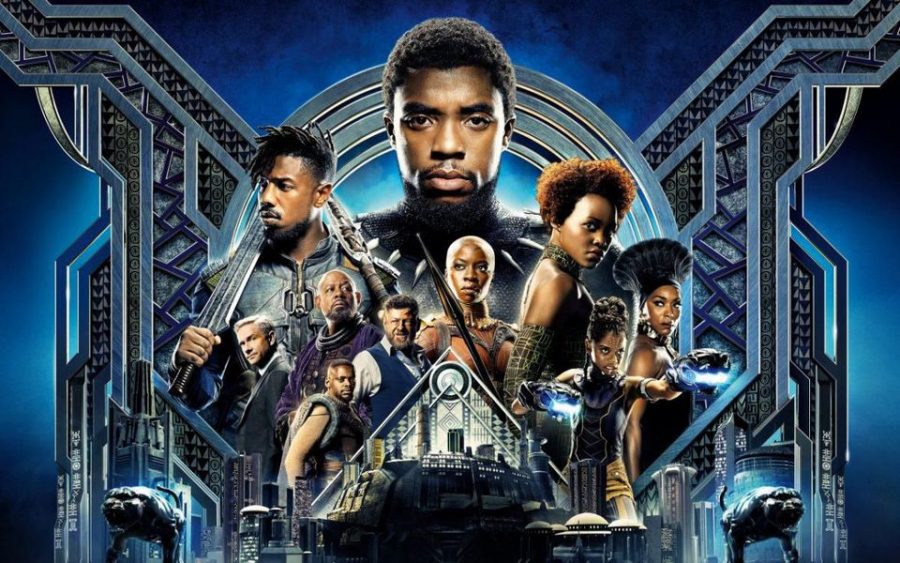 Black Panther is the newest movie from Marvel Studios. It is the eighteenth movie in the Marvel Cinematic Universe (MCU).

This movie was good. I know I am nearly alone on my opinion (as was the case with Star Wars: The Last Jedi). I only thought the movie was okay. The actions scenes were cool, the acting was great, there was a good message, and there was a cool villain. Why did I think it was okay? I have no idea. I can’t identify what is was about the movie that didn’t have me jumping up and down in my seat. I watched all the MCU movies in order last summer and it was my first experience in the Marvel universe. I enjoyed most of the movies and liked most of the characters constantly getting added. Black Panther/T’Challa was introduced in Captain America: Civil War. It sometimes takes a new character time to grow on me, and Black Panther helped me know T’Challa more.

This movie had great action scenes. Without giving anything away, there is a very cool car chase scene that I liked that came right after a scene that reminds most people of James Bond/Indiana Jones. The movie, like most Marvel movies, did not disappoint fans with its action scenes or fight scenes. The movie knew its character’s strengths and really exemplified them well in the action scenes.

I really liked the acting in this movie. Chadwick Boseman did a great job continuing his work as T’Challa/Black Panther. T’Challa is a complex character with a lot of ideas of tradition vs. charity running through his head. He is constantly torn in the movie between helping people in the world who need it and keeping Wakanda secret. Boseman did a good job portraying this character and I look forward to seeing him again in Avengers: Infinity War. Two really notable actresses that really show the strong female role model are Lupita Nyong’o (Nakia) and Letitia Wright (Shuri). Nakia portrays a more charitable side to Wakandan culture. She stands up for what she believes is right and Nyong’o really does a good job showing this characteristic. Shuri is T’Challa’s genius younger sister who is constantly making new tech for the Black Panther suit and incorporating vibranium. Wright did a great job showing the humor Shuri constantly displays and her love for her brother. Martin Freeman did a really good job continuing his work as Everett K. Ross. Freeman had previously played the part in Captain America: Civil War and it was nice to see him return. Freeman brings a little humor in the movie and his obliviousness to the land of Wakanda helps incoming viewers learn more about the country.

The villain in this movie is very evil. Arguable one of the best Marvel villains so far (although Loki will still be one of my favorites), Erik Stevens/Killmonger brings a touch of humanity to the cold-hearted enemy. Marvel villains are known for their main motivation being “power” or “money”. But, Erik actually has a motive that works. Without giving away any plot devices, I will just say that Erik is fueled by the neighborhood he grew up in, the situation his father was in, and the way his native country treated the situation. Erik became a fan favorite villain instantaneously and was a real threat to T’Challa.

Overall, why did I only think this movie was okay? I liked many things about it, it was well done, there was humor, action, and good acting. Why did I not enjoy the movie? I’m not sure. Black Panther is really cool, but he’s not my favorite superhero. The movie may have been really good, but for me it was only okay. If you didn’t get a chance to watch the movie, I would highly recommend renting it, and buy it if you’re a huge Marvel fan.

I really liked the casino scene that transitioned into the car chase scene. This whole sequence was really cool and one of the best parts of the movie. Some parts were awesome (all of T’Challa and Shuri’s scenes), but some parts didn’t work for me. I’m not a huge comic fan, so I don’t know if there’s some reason for this, but Okoye had reflexes that didn’t seem humanly possible. I know it’s a movie, but usually Marvel movies understand human limitations and get around it with heart-shaped herbs or super serums.

Some other scenes I liked were the challenge scenes. The scenery was cool looking and the suspense of the fight over a waterfall was amazing. My only problem was the scene were Erik throws T’Challa off the waterfall, overthrowing the monarchy and becoming king. This seemed a lot like The Lion King to me, and the movie even had T’Challa run away and come back to reclaim his throne.

One of the things I did not like about the movie was the rhinos. They were made using computer generation, but they looked really fake. A lot of the computer generated things in the movie looked pretty good or realistic. But the rhinos just looked fake.