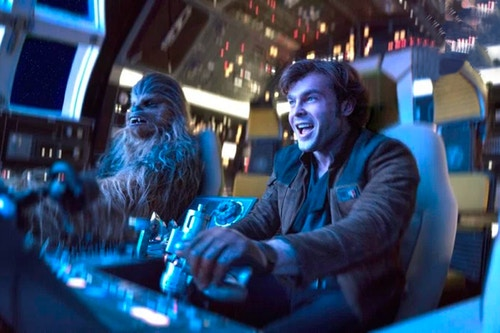 Solo: A Star Wars Story is an upcoming movie from Lucasfilm. It is the second Star Wars anthology film (after Rogue One) and the tenth Star Wars movie overall. It stars Alden Ehrenreich (Han Solo), Emilia Clarke (Qi’ra), Woody Harrelson (Tobias Beckett), Donald Glover (Lando Calrissian), and Joonas Suotamo (Chewbacca). Not much is known about the movie, but we do know that it is about a younger Han Solo going on adventures with Chewbacca, Lando Calrissian, and others aboard the Millennium Falcon. I am very excited for this movie. Han Solo is one of my favorite characters of all time, so seeing him with his own movie is pretty cool. As the trailers show us, the Millennium Falcon is much newer and cleaner than when we see it in the original trilogy. It looks like Lando takes better care of the ship than Han. The casting seems good and Ehrenreich looks like a good substitute for Han, since Harrison Ford first played the character. Solo: A Star Wars Story comes out May 25, 2018 and is rated PG-13.