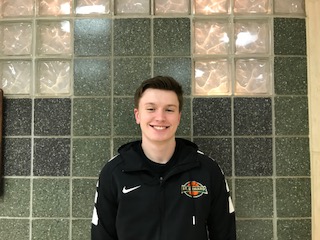 Collan has been playing basketball for 8 years. His favorite memory was from his sophomore year when, “We were losing a game pretty bad so the second half Coach Williams said just get the ball in and whoever gets it, sprint down the court and jack up a three, no passing allowed.” His favorite NBA player is Giannis Antetokounmpo. Collan’s advice to underclassmen is “Stick with it when you want to quit. It may seem like a lot of work and it’s not going to be fun, but it’s all worth it to make the unforgettable memories with your team and grow closer to them all.” His team MVP is AJ Franklin or Luca Corso because he hasn’t made us run all season, which has never actually happened before.