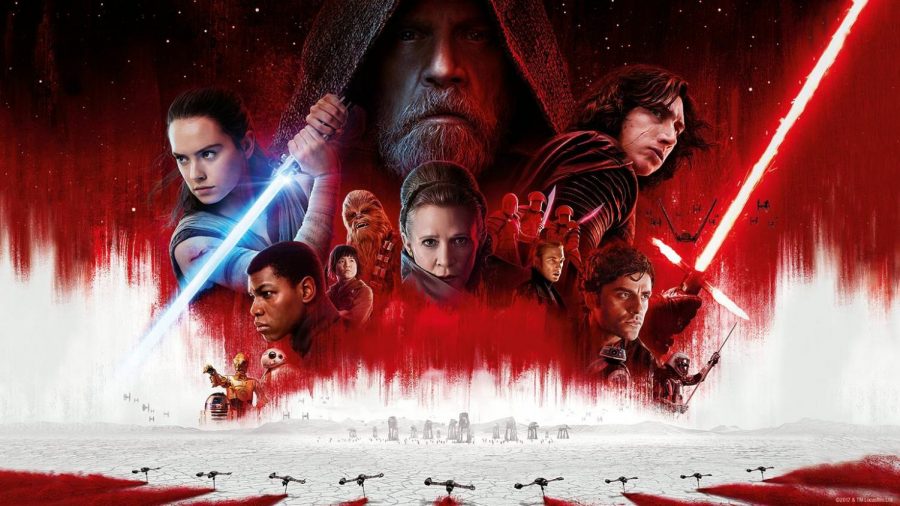 Star Wars: The Last Jedi is the eighth movie in the Star Wars saga, but the ninth Star Wars film made overall (Rogue One: A Star Wars Story came out last year, making it the eighth).

I know this review will be controversal, but I must say my true opinion of the movie. I loved it. It is one of my favorite Star Wars movies now. I thought the story was really cool, and it changed up the style of a typical Star Wars movie.

The reason I said this review would be “controversial” comes from my observation of other people’s views. Looking on the internet, I find constant fan reviews saying how “terrible” the movie was and how it “ruined their view of the Star Wars franchise”. Personally, I think the changes made to certain characters worked and that the movie was an excellent addition to the saga.

Let’s start the review on plot. The plot of this 2 hr 32 min movie (the longest Star Wars movie to date) was considered by some to be slow. I disagree. The story of the rebels gradually losing fuel as the First Order patiently follows them is suspenseful and the subplot with Finn (John Boyega) and Rose (Kelly Marie Tran) hinges on this development. I think the main story with Rey (Daisy Ridley) and Luke (Mark Hamill) worked well and I really like how they didn’t copy Luke’s training with Yoda from The Empire Stirkes Back.

My only complaint with Star Wars: The Force Awakens was that it was too similar to A New Hope. The Last Jedi goes out of its way to show that it is not mimicking Empire. Of course, there are a few parrellels (even a parrellel to Return of the Jedi), but this is forgivable because it doesn’t take away from the main plot.

The acting was phenomenal. Mark Hamill shines as the new, gruff, and aged Luke Skywalker. Hamill has said that he didn’t agree with Rian Johnson’s view of his character, but in recent interviews he has said the view has started to make sense to him. A lot of viewers had complaints about Luke’s change in attitude, but I was fine with it. I get that people change when they age and sadly, Luke grew a little less optimistic.

Of course, I have to talk about Carrie Fisher’s role in the movie as General Leia Organa. Fisher was amazing. She never lets us down and continued to give a five-star performance. If you didn’t know, Carrie Fisher passed away on December 27, 2016. Luckily for The Last Jedi, she had finished filming her role before she passed away. Rian Johnson has said that the movie was not edited after her passing and that they kept the movie exactly as she made it. There were multiple moments during the movie when the audience cheered for Leia.

Most people were afraid of porgs. Porgs were the small birds that lived on Ahch-To with Luke. They were marketed as the typical “cute creature” for the kids. Many people worried that they would be overused (like Ewoks), but I think their fears were put away. The porgs were in the movie enough to remind you that they were there, but they were not overbearing.

I only had two small complaints with the movie. One: I felt that Lupita Nyong’o’s character, Maz Kanata, was forced into the movie. She played a very small “here’s some information” part for the movie. Two: C-3PO, R2-D2, and Chewbacca’s roles have been reduced in this trilogy. I get that they’re trying to introduce new characters, so the old characters have to take a step back, but I miss the bickering of the droids.

Overall, this movie was fantastic. The acting, camera work, and story was great. I really liked this movie and I’m sad that other people don’t feel the same. I hope you get a chance to see it in theaters. If not, this movie is definitely worth buying when it comes out on DVD.

This movie had several moments that shocked me, but I think completely worked for the movie. Here are two of the things that happened that I think really helped the movie.

One of my favorite parts in this movie was the surprise appearance of Yoda. Force ghost Yoda appears to Luke on Ahch-To and (literally) knocks some sense into him. Yoda was also back in puppet form. The puppet looked very close to the original from The Empire Strikes Back, and this is because the crew used the original mold to make it. I think Yoda’s inclusion helped the movie because the old Jedi helps Luke figure out his mistake.

Another part I think worked was Leia finally using the Force. In the movie, the rebel’s ship is attacked and Leia is sucked out into space. I thought this was going to be the movie’s cheesy way to kill off Leia because of Carrie Fisher’s passing, but it wasn’t. Leia holds out her hand and is pulled back to the ship. This scene was amazing! Fans finally get to see Leia use the Force, something we’ve been waiting for since 1983’s Return of the Jedi. The fact the Leia lived through the movie was fantastic, but I do wonder what’s going to happen in Star Wars IX.