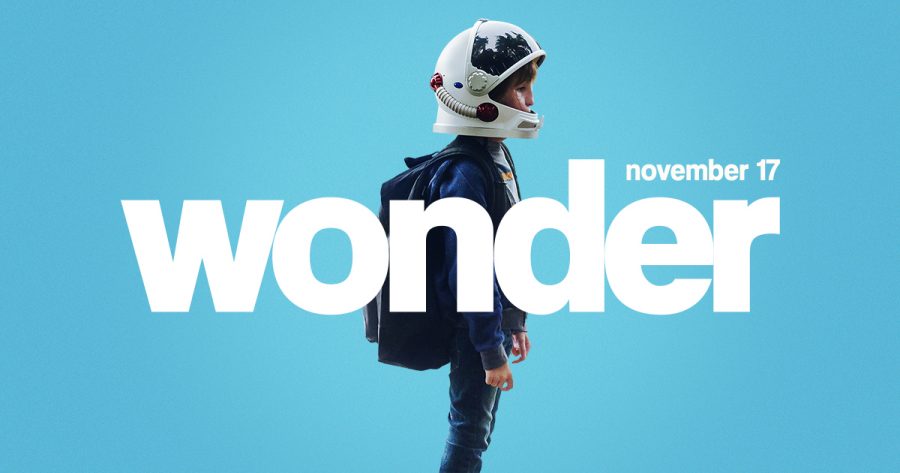 Wonder is a new movie from Lionsgate. It is based off a book of the same name. It features the intertwining stories of people in the life of August (Auggie) Pullman and how they all are affected by each other. Auggie is a young boy about to start 5th grade. He was born with a rare face deformity and has undergone several surgeries to help him live. After being home-schooled his whole life, he finally is sent to a real middle school to face the challenges of bullying and friendship that come with having a condition such as his.

This movie was one of the most inspiring, heart-warming, tear-jerking movies I’ve seen in a long time. The story was amazing and very well-written. The characters were realistic and relatable. The entire film was very well done and there was never a part in the 1 hour 53 minute movie where I was bored.

The boy who played Auggie, Jacob Tremblay, was amazing! Being 11 years old, his age fit the character exactly. The make-up done to give Tremblay his facial deformity looked so realistic, it is hard to tell if it is real or not. (Before researching the actor, I thought there was no make-up!) Auggie has a personality so magnetic, it is hard not to want to be friends with him. The character is nice and thoughtful. Tremblay brings this personality to life so nicely and really hits a grand slam with his acting.

This movie is not all about Auggie, though. The movie took a turn I didn’t know it would take (I would have known if I had read the book before the movie). The movie follows the stories of other people in Auggie’s life as well. Including Auggie, there are four main characters (their stories separated by a black screen with the character’s name on it). These people all have a place in Auggie’s life somewhere. First, there is his sister, Olivia (Via) Pullman. Played by Izabela Vidovic (who gave a spectacular performance) the character shows the audience that it’s not easy being the sister to a boy who needs a lot of attention. Via is constantly forgotten about (not in a mean or purposeful way) by her parents who try to help Auggie adjust to his new life in a real middle school. Via is extremely relatable to people who may be in similar situations such as her’s. She shows that even though she may not be the center of attention, her parents still love her and she still loves her brother.

Other characters that have big parts are Jack Will, a friend that Auggie makes in school and Miranda, a friend of Via’s that starts to drift away. The movie shows how they feel throughout the story and how their interactions affect the Pullman family or vice versa.

Auggie’s parents (played by Owen Wilson and Julia Roberts) were amazing. They really brought to life the care and love that Auggie’s parents have. The audience really gets to feel their emotions for their son and get to see that they really care for their son. They brought some of the best acting into the movie along with the rest of the cast.

The movie shows large sections of bullying. The main bully in Wonder is named Julian. Julian is introduced and right off the bat is a jerk. But, as the movie progresses his actions get worse and worse and the audience really sees how big of a bully he is. Bullying is a serious issue and movies have a tendency to treat the situation in a cheesy or stereotypical way. Not Wonder. Wonder shows that not everyone has a cheesy “I’m sorry for what I did, let’s be friends” ending.

The only thing I had a problem with was one scene. The scene was sad and very well acted, but it was a little predictable. In the scene, Auggie’s dog, Daisy, gets sick. I’m not going to say what happened because this is the “Non-Spoiler” portion of my review, but just from that set-up, you can probably already guess what happened. Everything else in the movie wasn’t too predictable. There was multiple times in the movie when I had no idea what was going to happen next.

Overall, this movie was great. It gives a viewer smiles, tears, and an uplifting story. Personally, I didn’t cry, but the people next to me did. Multiple times. If you are looking for one of the best-acted movies in long time, see Wonder. If you didn’t get a chance to see it in theaters, I would highly recommend buying it when it comes out on DVD, or at least renting it.

There is only one spoiler that I find is really worth mentioning in this review. This is one of my favorite scenes: The scene where Auggie’s former bullies come to his rescue. Towards the end of the movie, Auggie and his classmates are going on a trip to a Nature Reserve. Julian is not going, so Auggie has much less pressure from bullying. He and his friend Jack Will are walking though the forest together when a group of 7th graders meet them. The older kids bully Auggie and push Jack Will to the ground. Before they can reach Auggie, however, 3 boys from Auggie’s class come and stop them. The 3 had previously been Julian’s friends and partaken in bullying Auggie. They had seen their errors though, and now jumped onto the 7th graders to save Auggie. It was one of the most powerful scenes to me. 3 kids who had previously bullied Auggie were coming to his rescue. This was just one of the scenes that made this movie so great.