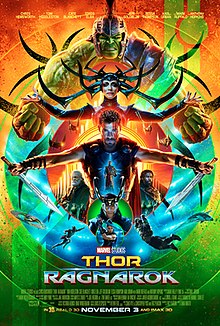 Thor: Ragnarock is an upcoming Marvel movie centered around everyone’s favorite god of Thunder: Thor. Thor: Ragnarock is the third Thor film and the seventeenth film in the Marvel Cinematic Universe (MCU). The film will star Chris Hemsworth (Thor), Tom Hiddleston (Loki), Cate Blanchett (Hela), Idris Elba (Heimdall), Jeff Goldblum (Grandmaster), and Mark Ruffalo (Hulk/Bruce Banner). The movie has been long awaited since Thor: The Dark World, which came out in 2013. The plot consists of Thor being held captive on the planet Sakaar without Mjolnir (his hammer) and having to win a gladiatorial fight against the Hulk to return to Asgard to stop the evil Hela and the impeding Ragnarok. Personally, I plan to see this movie as soon as it comes out because I am excited to see the Hulk return. Obviously, that’s why everyone wants to see this! For the Hulk! Okay, okay, you probably just want to see the fight between Thor and the Hulk. As for runtime, the director (Taika Waititi) had this to say to Collider: “The cut right now, I reckon it’s about 100 minutes. It’s not gonna be a very, very long film. I think that stories are better when you leave them wanting more, and this film moves at a clip, it’s got stuff happening all the time. I think people are still gonna feel exhausted by the end, they’ve been on this big journey and stuff, so I don’t think we need the film to be three hours.” Thor: Ragnarock comes out November 3, 2017 and is rated PG-13.