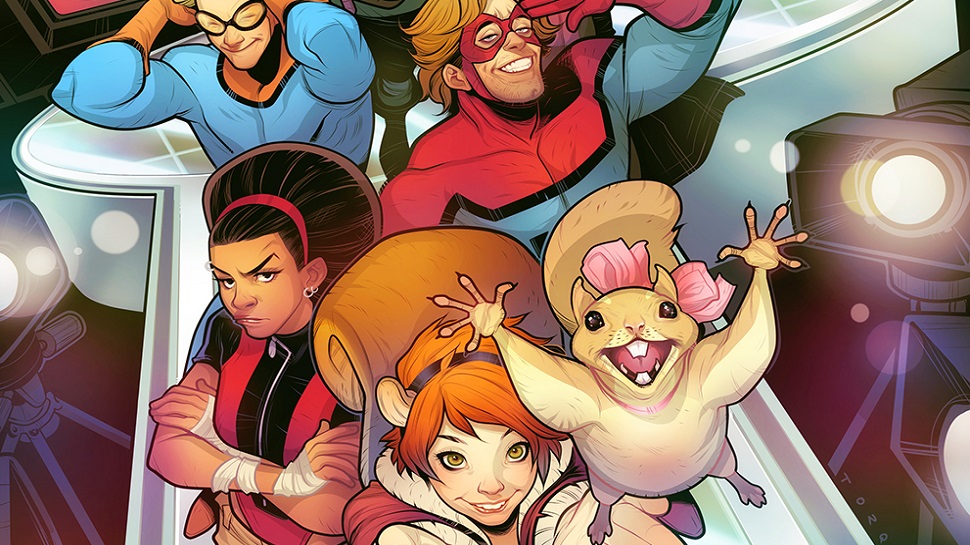 Everything that we know (so far) about Marvel's upcoming comedy

On Wednesday April 5, Marvel announced that a live-action half-hour comedy series based on Marvel’s New Warriors is in development by Marvel Television and ABC Studios. This new series has received a direct-to-series order with ten episodes, and will debut on Freeform, previously ABC Family, sometime in late 2018. This new series, titled Marvel’s New Warriors, is co-produced by Marvel Television and ABC Signature Studios. Jeph Loeb, Marvel’s Head of Television, will be executive producer of the series, along with Jim Chory, who is an executive producer on many of Marvel’s TV shows. Kevin Biegel, a writer and producer best known for his work on Scrubs and Cougar Town, serves as showrunner and executive producer.

Marvel’s New Warriors is about six young people with powers living and working together. “With powers and abilities on the opposite end of the spectrum of the Avengers, the New Warriors want to make a difference in the world… even if the world isn’t ready,” a statement from Marvel Comics reads. “Not quite super, not quite heroes, Marvel’s New Warriors is about that time in your life when you first enter adulthood and feel like you can do everything and nothing at once – except in this world, bad guys can be just as terrifying as bad dates.”

Marvel’s New Warriors will be Marvel’s first thirty minute comedic superhero TV series. After seeing the success of popular DC Comics “dramedies” such as The Flash and Supergirl, it makes sense that Marvel would start to go down that same road. From the looks of it, the New Warriors are basically the Avengers-brand of the popular DC Comics team, the Teen Titans; they are a group of quirky and relatable teenage and young adult heroes who want to make a difference in the world (even if their power’s aren’t as developed nor as impressive as those of the Avengers). The New Warriors have to learn how to use their abilities to help people, while also struggling to grow up.

If you are a New Warriors-newbie, here is a brief crash course on the history of the team:

The New Warriors is a Marvel Comics series originally created by comic book editor and writer Tom DeFalco and comic book artist Ron Frenz. DeFalco and Frenz co-created the New Warriors in issue #411 of The Mighty Thor in 1989. Shortly after, the New Warriors got their own comic book series and have seen many iterations since. The original New Warriors series lasted seventy-five issues, which was no small achievement in the early 90’s, but it never became the huge hit that Marvel wanted it to be. Several other attempts have been made at reviving the New Warriors team over the years, but none of them lasted more than twenty issues in total.

Marvel’s New Warriors is based on the iteration created by comic book writer Zeb Wells and comic book artist and illustrator Skottie Young. Their’s was a six-issue mini-series that featured the New Warriors as the stars of their own reality TV show. In this version, original members Night Thrasher, Speedball, and Nova were joined by new characters Microbe and Debrii. These New Warriors have a notorious reputation in the Marvel Universe because of a televised fight against a group of super villains in Stamford, Connecticut. This particular incident was one of the sparks that led to the “Superhero Registration Act” and the Civil War comic that followed as a result. Fans of the Marvel Cinematic Universe will be familiar with this particular comic, since it’s the basis of the popular move ‘Captain America: Civil War.’

The new series from Marvel and Freeform is pulling from the various iterations of the New Warriors comics and are focusing mainly on characters that were created exclusively for the team. On April 19, Marvel and Freeform revealed the team of somewhat-superheroes, who will be joining the previously announced Squirrel Girl, in Marvel’s New Warriors. They include a YouTuber, a hypochondriac, and a lazy immortal to name a few. Its good to know that the world is in good hands…?

Here is a bit of background information on the newly-revealed members in this new iteration of the New Warriors team, along with Marvel’s descriptions of their TV incarnations. You can find the character line-up and even more information about Marvel’s New Warriors on marvel.com.

The New Warriors is the second Marvel series order at Freeform. Freeform also has Marvel’s youth-oriented Cloak and Dagger underway for 2018, which will star Aubrey Joseph and Olivia Holt. (You can watch the official trailer here!) This is part of a corporate effort by Disney, who owns both marvel and the corporate network. “Expanding our relationship with Marvel is a big priority for us,” says Tom Aschiem, President of Freeform, formerly known as ABC Family.

I don’t know about you, but I have high hopes for this new, quirky band of misfit heroes. In a world full of extremely serious and sometimes overly-dramatic superhero movies and TV shows, The New Warriors will be the comedic breath of fresh air that we all didn’t know we needed. It’s important for Marvel to make The New Warriors, and even Cloak and Dagger, right; after TV flops such as Agent Carter – which was canceled after its second season due to poor ratings – and Agents of S.H.I.E.L.D. – which dropped in ratings once again, and was even moved to a 9pm time slot on ABC – these two shows, in my opinion, will determine the future of Marvel TV. Marvel is, however, remaining successful when it comes to Netflix Original shows, such as Daredevil and Luke Cage.

What do you think about Marvel’s upcoming new comedy series, Marvel’s New Warriors? Tweet us your thoughts (@St_Edward_Edge) or leave a comment, letting us know whether you’re excited or your opinions on this iteration of the New Warriors team.