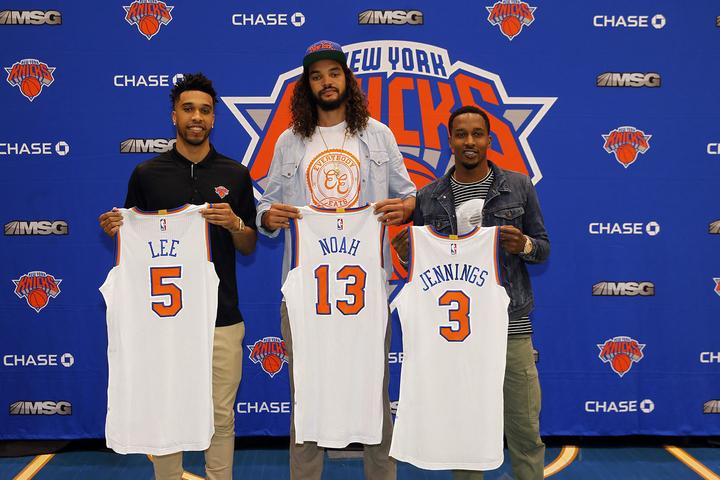 Courtney Lee (left), Joakim Noah (middle), and Brandon Jennings (right) are three key signings that the Knicks made in an effort to loft them into title contention.

The Knicks are one of the two “super teams” in the NBA according to new point guard Derrick Rose. This comes after they trade for Rose, sign fellow former Bull Joakim Noah, 3-and-D wing Courtney Lee, and offensively gifted point man Brandon Jennings. Those four new additions will join a Knicks core of Carmelo Anthony, Kristaps Porzingis, and not much else. To the rest of the world this roster is far from super team consideration. Even if they don’t match the Warriors win total from last year, or get the top seed in the East, this Knicks team sure will be interesting. Joakim Noah and Brandon Jennings form one of the scrappiest and belligerent duos in The Association. Unfortunately for the Knicks, Noah and Rose are two of the most injury plagued players in the NBA. If the Knicks are able to remain healthy for the majority of the season, they could legitimately be one of the three or four best teams in the East. That looks extremely unlikely thanks in part to Noah only playing an average of 64 games per season. Pair that with Rose who has played only 166 games over the five past years since his MVP season in 2011 and you have a Knicks team who could be without their starting center and point guard for extended periods of time this season. It could be an absolute dumpster fire in The Big Apple, but maybe, just maybe, things will actually work out and the Knicks will make some noise this season.