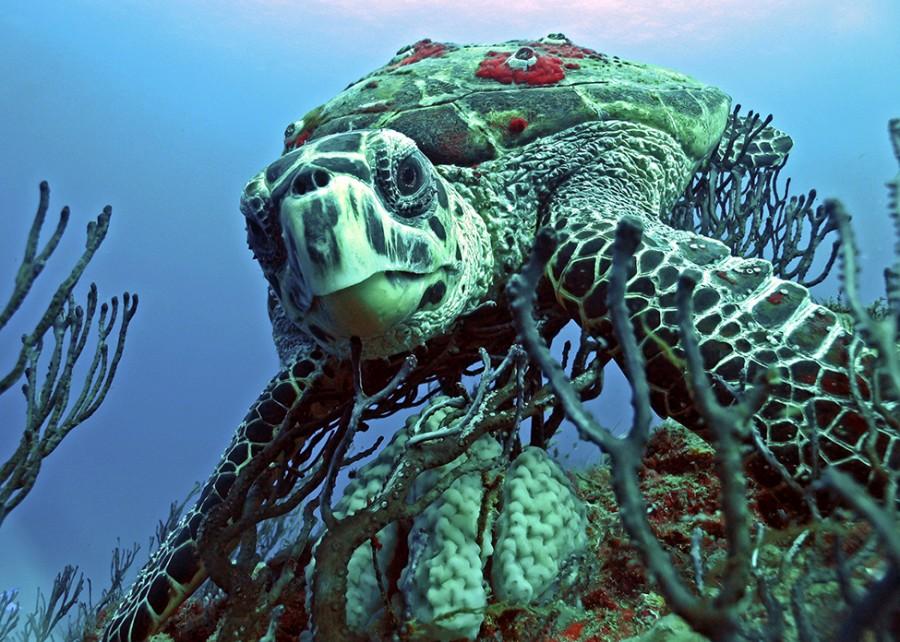 Hawksbill sea turtle munching away on a sponge in Kapaa, Hawaii.

Atomic bomb fallout found in the shells of sea turtles can be used to accurately estimate ages, growth rate, and reproductive maturity of sea turtle populations in the wild by radiocarbon dating the shells.

In a new study spearheaded by Duke University and the National Oceanic and Atmospheric Administration (NOAA), the technique of radiocarbon dating helps scientists estimate more accurately than other methods currently being used and could help scientists understand why some populations of turtles are endangered and how to better protect them.

“The most basic of questions of sea turtle life history are also the most elusive,” said Kyle Van Houtan, fisheries research ecologist at NOAA’s Pacific Islands Fisheries Science Center and adjunct associate professor at Duke’s Nicholas School of the Environment.

In analyzing the hard tissue from the shells of 36 deceased hawksbill turtles, the scientist were able to estimate each turtle’s approximate age by comparing the bomb-testing radiocarbon accumulated in its shell to background rates of bomb-testing radiocarbon deposited in Hawaii’s corals. These hawksbill turtle shells have been collected from as far back as the 1950s. Since the Cold War was going on, many nuclear tests were initiated and between the 1950s and 1970s the levels of carbon-14 rose rapidly in the biosphere. Since then, the carbon-14 in the environment has dropped at a predictable rate, making it easy for scientists to accurately determine the age of an organism based on its carbon-14 content.

This is the first time carbon-14 dating of shell tissue has been used to estimate age in turtles. The research was published on January 6, 2016, in the Proceedings of Royal Society B. Giving scientists more reliable estimates of age, they can also show why certain populations of hawksbills are not growing.

“ Our analysis finds that hawksbills in the Hawaii population deposit eight growth lines annually, which suggests that females begin breeding at 29 years—significantly later than any other hawksbill populations in the world. This may explain why they haven’t yet rebounded,” Van Houtan said.

Radiocarbon dating can also help show red flags in species. “They appear to have been omnivores as recently as the 1980s. Now, they appear to be primarily herbivores. Such a dramatic decline in their food supply could delay growth and maturity, and may reflect ecosystem changes that are quire ominous in the long term for hawksbill populations in Hawaii,” he said.

Currently the carbon-14 dating is only being used in hawksbill turtles from around Hawaii, bomb radiocarbon dating could have uses with other hawksbill and perhaps other sea turtle species.