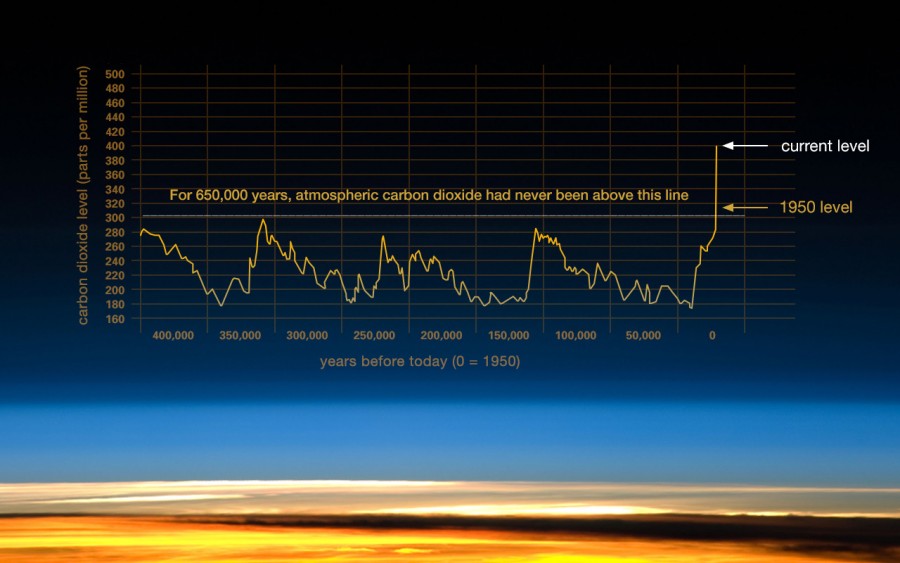 Have you ever wondered why the past couple of winter seasons have had little snow, but then a sudden blizzard-filled week to follow? Or why the seasons have slowly been shifting later into the year? That’s called Climate Change, and it’s a huge problem.

Climate Change, or Global Warming, is an effect man has made on the world through our emission of carbon dioxide. These “greenhouse gasses” rip apart the protective Ozone layer in our atmosphere and trap the sun’s UV rays within them. This creates an extreme world-wide warming effect, which will have disastrous effects on our planet in the future.

Humans as a species have a tendency to focus on the immediate rather than the long-term, especially when it comes to consequences. We may not change the way we live if the current generation isn’t the one that will face the consequences. However, it is for that reason that some have taken action.

Global warming, when its attention was first raised to the public, was originally thought of as a “myth” by some. It does seem a little surprising that something as probable as scientific fact can be regarded as “fictional,” but people never fail to surprise.

Take for example a former founder of The Weather Channel, John Coleman. In an interview with Next News Network’s Gary Franchi he claimed, “The warming is 99.99% natural, we’re putting carbon dioxide into the air through our burning of fossil fuels and the entire ‘Global Warming Scare’ campaign is based on that carbon dioxide. We have pretty well proven it only creates a fraction of a degree of the warming over a decade. It is a general insignificance. It is no threat to our fine hood of the Earth, no threat to our civilization, and no reason to end the use of fossil fuels.”

When you are a founder of the Weather Channel, it is no surprise your input can be influential. However, “weather” is significantly different than “climate.” This is where those with the proper knowledge, equipped with the right technology come into play.

Scientists at NASA have uncovered profound evidence of not only an increase of carbon dioxide in the atmosphere during the years of the Industrial Revolution (see picture), but also the effects this CO2 increase has had on the Earth. These repercussions include but are not limited to: rising sea levels, rising global temperature, ocean warming, a decline in arctic sea ice, shrinking of Antarctic ice sheets, ocean acidification, and glacial retreat within the Alps, Rockies, Andes, Himalayas, Alaska, and Africa.

Does this look like “a fraction of a degree of the warming over a decade?” The Intergovernmental Panel on Climate Change (IPCC) put it this way, “Scientific evidence for warming of the climate system is unequivocal.” Meaning that without a doubt, Climate change is real and it’s happening fast.

Well, relatively fast. During the 20th century, the average climate of the Earth has been raised one degree Fahrenheit. It doesn’t sound like much, but the Earth has remained in the same Climate zone (with natural periods of increase and decrease) for hundreds of thousands of years. A small increase in climate equals a drastic alteration of the environment. To put it into perspective, during the last ice age when the U.S. was completely covered in more than 3,000 feet of ice, the average climate was only about 5 degrees lower than it is now.

The IPCC forecasts an average increase of 2.5 degrees to 10 degrees Fahrenheit within the next century. If a 5 degree decrease can cause an ice age, imagine what a 10 degree increase could do. It is already feasible to say that the grandchildren of our generation will never see snow, imagine what the grandchildren of their generation will never see.

It is getting dangerously close to the point of no-return; we are already causing permanent, long-term damage to the planet as it is. If our generation doesn’t recognize what we are doing to our only planet, we are condemning the Earth to a fire-y and premature demise, and our children and grandchildren will have to suffer the consequences.