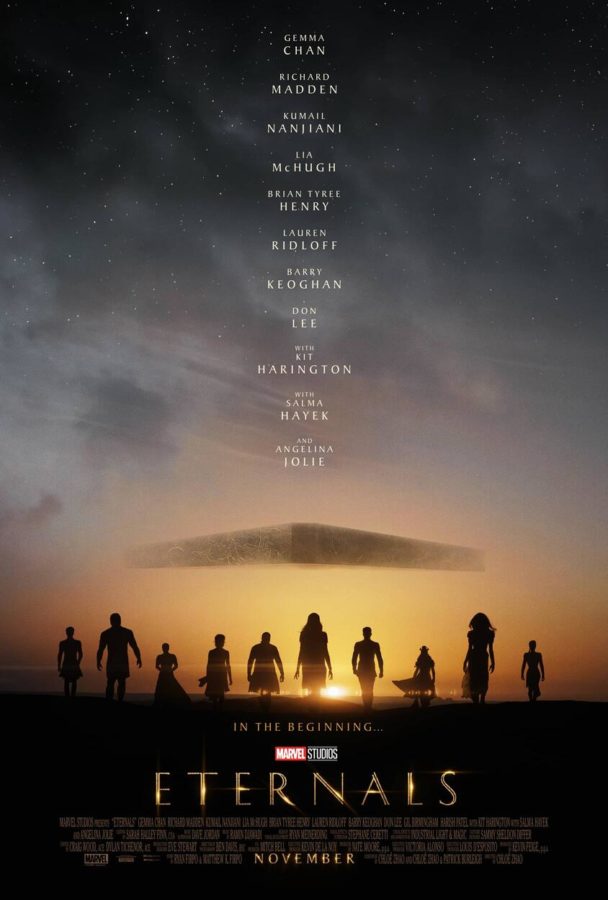 The latest Marvel Cinematic Universe movie, Eternals, follows a group of ten superpowered protectors of Earth sent by the Celestials to eradicate the Deviants, but these immortal beings known as the Eternals are not allowed to involve themselves in any conflict outside of ones related to Deviants. After parting ways from the group after the last of the Deviants was thought to be killed, a tragedy will unite the Eternals to take on the Deviants once more.

Released on November 5, 2021, Marvel’s latest movie, Eternals received mixed reviews from critics and honestly, it was deserved. The movie was just okay, I didn’t hate it, but I didn’t love it either. This movie was an ambitious project, the makers of the film had to introduce ten new characters while setting up future movies and create a story with character and plot development. Because of this, there were parts of the movie that didn’t feel fully explained. In more emotional scenes, I did not feel the impact of the moment because I felt like I didn’t know the characters that well and wasn’t able to build a connection to them.

In terms of highlights, I would say that there were several touching moments between the friendship of Gilgamesh (Don Lee) and Thena (Angelina Jolie) as they both worked together and stuck by each other during Thena’s internal conflicts. Similarly, the relationship between Kingo (Kumail Nanjiani) and his human valet, Kuran (Harish Patel), added some lighter, comedic moments to the story as their relationship dynamic was aptly compared to Batman and Alfred in the movie. Visually, the movie was stunning through its use of different locations from the vibrant colors of Babylon and India to the more earthy tones of Australia and the Pacific Islands. The way the Celestials and Eternals powers were portrayed graphically were very ethereal in its use of gold colors and stone textures, giving the movie an ancient and supernatural tone throughout.

For an overall ranking of all MCU movies, I would put this one towards the bottom. It was still entertaining to watch and set up some exciting storylines to be featured in future Marvel movies (*cough* Harry Styles as Eros *cough*), but the movie had too much happening in it for me to be fully invested in the characters. I would still recommend seeing it as it does add to lots of MCU lore and will definitely be referenced in other Marvel movies. If you are a casual viewer of MCU movies, this movie works well as a stand-alone film and does not tie in heavily with the other films, so it is easy to get into. I would give this movie 3.5/5 stars