Stepping into the story of 39 Steps 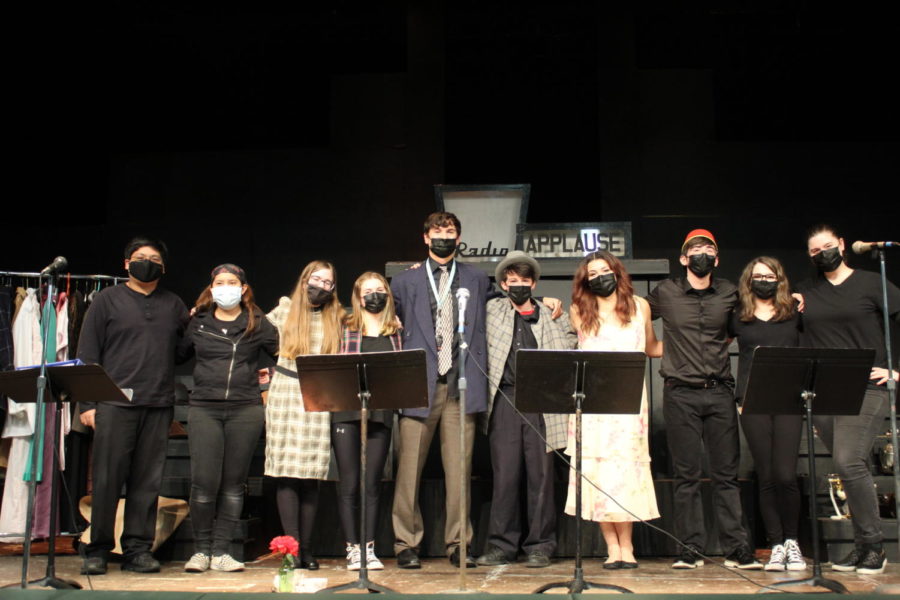 The cast of 39 Steps after the saturday show

On the weekend of October 23-24, the St. Edward Drama Club put on a spectacular performance of 39 Steps. The play starred seniors Ryan Sauceda, Izzy Kirkwood, and Jaden Delort, sophomore Joseph Lee, and freshmen Alexa Griffin. The play was directed by Mrs. Syrris and ran as smoothly as one could hope. The plot of the play dealt with an everyday man having to take on an extraordinary mission. He had to become a spy, in order to find out what the 39 steps were and stop it before it was too late.

Jaden Delort stated that his takeaway from participating in the production is the great bond of the cast. The bond Jaden Delort was implying was evident watching the cast interact with each other on stage and the energy they had with each other. They were able to help the newer members get used to acting. Ryan Sauceda, who played Richard Hannay, said, “I had a lot of fun doing the play, I think it’s some of the most fun I had in a while. I was a little nervous acting for the first time, but I kept at it and eventually it became natural.”

Students not only acted onstage but helped backstage as well. Lilly West, Jeremiah Roldan, Halina Haydock, Nina Filippi, and Daniella Vega were the crew for the play and helped the play continue seamlessly. Junior Nina Filippi, who ran the sound cues said, “I’d have to say my favorite memory was being able to work with such an awesome cast and learning what goes on behind the scenes to make a show happen.” Mrs. Syrris did a great job on helping the students adapt to their roles and learn their new jobs. Ryan Sauceda said, “I would like to thank Mrs. Syrris for her patience through it all. If it wasn’t for her then there would be no play and I wouldn’t have the experience I have now.”

Congratulations to the cast and crew of 39 steps, who encourages everyone to try out for the spring musical, You’re a Good Man Charlie Brown.