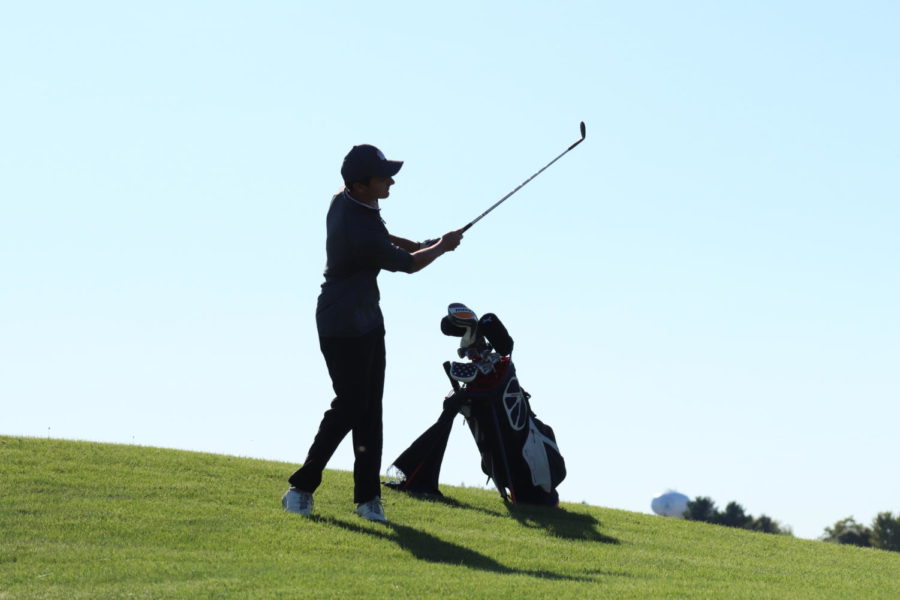 However, we can’t forget about the impact the JV team made this year. After making tremendous improvements, this JV team has a lot of positive things ahead of them. The team consisted of the following: Edwin Ouimet, Thomas Sheridan, Christopher Taing, Cole Weidmaier, Angel Monarrez, and Nicholai Szydzik.

This past year, Covid-19 wasn’t an issue. There isn’t a high risk regarding the IHSA safety guidelines, so the golfers made the most of their year. Before winning the Metro-Suburban Red Conference, the team made huge steps after years prior. Four-year senior golfer, Kyle West, says, “I really enjoyed the game because it is so social, you can play with anyone, and you can meet some really great people. I had zero golf experience going into high school, so it truly was a trip for me, and man that trip had some up and downs.”

Kyle West played golf all four years at St. Edward. He played with the JV squad in his freshman and sophomore years, and with enough time and dedication, he was a full-time varsity player for his junior and senior years. “There were days I wanted to throw my clubs in the pond and never touch the sport again, other days I thought I could take Tiger on a 1v1,” Kyle remarked. Kyle had no experience with golf going into high school, so seeing him improve from shooting low sixties to mid to high forties is something we can all look at and admire. Kyle’s favorite golfer is Phil Mickelson and his favorite memory from his high school golf career was when he and senior Ryan Mamrot were falsely accused of hitting some man’s house at GCI.

Ryan Mamrot has also played all four years of golf at St. Edward. He played for two years on JV and two years on varsity as well. “I enjoyed the season this year because I enjoy playing the sport and got to play with my friends,” Ryan said about this season. Ryan’s favorite memory is also the time Kyle West was falsely accused of hitting a guy’s house. Ryan has made huge strides since his freshman season and has helped the team tremendously during his time as a Green Wave golfer.

Charlie McQueeny is a four-year varsity golfer which means he never played a JV match in his St. Edward career. Charlie has been a great contributor on the course and has played the state playoffs every year. His favorite memory is also when Kyle West was accused of hitting the guy’s house. “I enjoyed competing and having a good time with my friends,” Charlie says. His favorite player is Jordan Spieth. Just like Spieth, Charlie has been a very coachable player and has always been open to improving his game.

Jack Heffelfinger is also a four-year player. Even if he did not see as many varsity appearances as the other seniors, he made just as big of an impact on the team. Jack could always be seen improving his swing during every practice or during matches or even when the coaches are talking. This just goes to show how much pride and dedication he put forth in his time with the golf team. Jack has been the type of player who is always positive and doesn’t let a poor shot ruin his round. “My favorite memory is when I made a birdie chip out of a bunker,” Jack says.

Overall, everyone on the team did their part and contributed all they could this past year. Coach Aydt and Coach Genz were both very appreciative and proud of what the guys accomplished this year and can’t wait for what next year brings.