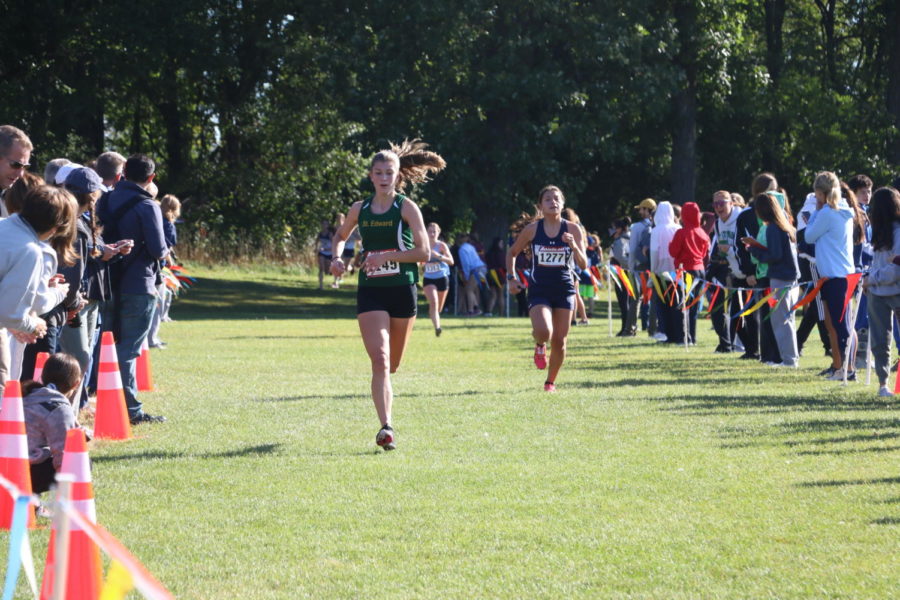 “The St. Ed’s Cross-Country team is back and better than ever,” says Coach Sanders, head of the athletic team. Since the time this fall sport started, the team has been practicing and pushing themselves immensely. Their hard work and dedication to the sport are like none other Coach Sanders has seen. Despite a very limited player base, the team is performing phenomenally and is fully inspired in themselves and their abilities.

Senior Sophia Scheider, who has been participating in this sport since her sophomore year, feels that Cross-Country helps increase her time management skills when trying to balance academics and sports. It also taught her the importance of training before a game, discipline, and teamwork. She says, “Your attitude plays a big factor in winning races. Thinking negatively can impact your running style; leading you to not perform well. But positivity in both the race and your abilities can bring a better chance for a successful run.” During last week’s Cross-Country conference, Sophia hit her personal best seasonal record with a whopping 20:55 time placing 10th place at Elmwood Park High.

Another runner, junior Thomas Walla, has been in Cross-Country since he was in 8th grade and hasn’t stopped running since. He was influenced by a friend to join the sport and says that it brings many positive factors to both your social life and sporting career. Whilst he was running, he says that he saw major improvements throughout his season and increased speed and endurance within other extra-curricular activities. The people that he met also played a role in his athletic career; the high-spirited and friendly runners motivated him to keep him going and to never give up. Being a runner has taught him to learn commitment and how to work as a team. He says, “This year we have seen massive improvements in our team’s times and places at the conference meet. As the boys’ team captain for next year, I look forward to helping the team even more.” With an impressive season, Thomas set a personal best record of 19:14 placing 19th place during last week’s meet.

Even though the pandemic locked us down and restricted sports, Cross-Country has made a full recovery. The players’ determination in the sport is strong and Coach Sanders is ready to lead another successful year.