Does Nagy need to go? 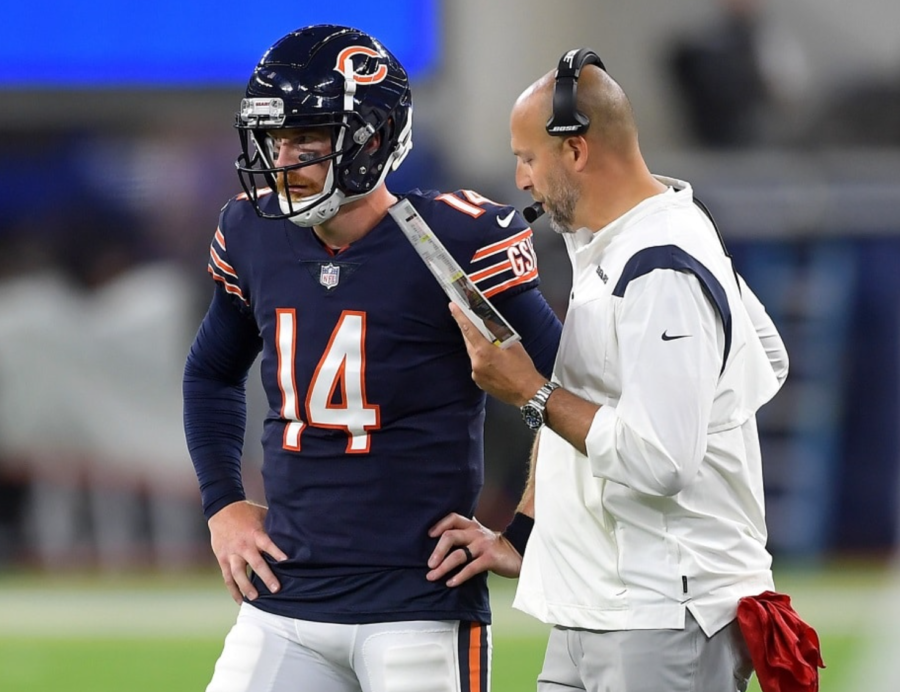 Chicago Bears’ week 3 matchup against the Cleveland Browns was the worst offensive performance in 20 years. The team was sacked 9 times in the 27-6 loss. Chicago’s offensive line was to blame, along with head coach Matt Nagy. Nagy has led this team to the playoffs two out of the three years, but has yet to show improvement on the Bears’ record or the overall team. Over this offseason, the Bears traded up to the 11th pick in the NFL Draft, to select QB Justin Fields. Fields is a dual-threat quarterback, with the potential to be one of the greatest quarterbacks in franchise history. Matt Nagy’s offensive scheme did not work with former 1st round pick Mitchell Trubisky, and as of right now, Justin Fields isn’t working either.

“The Chicago Bears should fire Matt Nagy today, because yesterday’s game plan, which was the worst one I’ve ever seen in my life, was either negligence or intentional,” says former quarterback Dan Orlovsky. Not only is Matt Nagy’s job on the line, but so is General Manager Ryan Pace’s. Pace has to choose whether he wants to keep his failing head coach, or have another QB bust fail in Chicago. Although the Bears did win against the Lions, week 4, you still have to remember that they are the Lions. Justin Fields and the Bear’s offensive line improved a lot after the 24-14 win over Detroit. Nagy quietly gave up his call playing duties to offensive coordinator, Bill Lazor. Nagy did the same thing last year during a stretch of losing games. Lazor’s offensive scheme is a lot more run based than Nagy’s, and it improved running back, David Montgomery’s stat line. Even though the Bears won, people are still not satisfied with Nagy.

“Nagy faced reporters and, with a straight face, said that Andy Dalton will be the starting quarterback when healthy,” says Bears Wire. After Fields’ impressive start, the Bears can’t afford to turn back to the veteran quarterback. Andy Dalton was brought in to be a mentor to Justin Fields, not to completely start over him the entire year, especially after Fields showed his potential in week 4. Past quarterbacks like Brett Favre and Alex Smith were starters over rookies (Aaron Rodgers, Patrick Mahomes) when they were new to the league. Andy Dalton does not perform like those Pro Bowl quarterbacks once did, and Justin Fields wasn’t brought into winning, like those other rookies had. Chicago needs to hire a coach that not only focuses on defensive needs but also offensive needs. We have been deprived of a solid offense for years, and that is our key to being contenders in a pass-heavy league. The Bears are at an expected 2-2 to start this year, but their schedule is riddled with playoff contenders. The team’s only hope is to start the young rookie and move on from their head coach.