Make a wave with volleyball 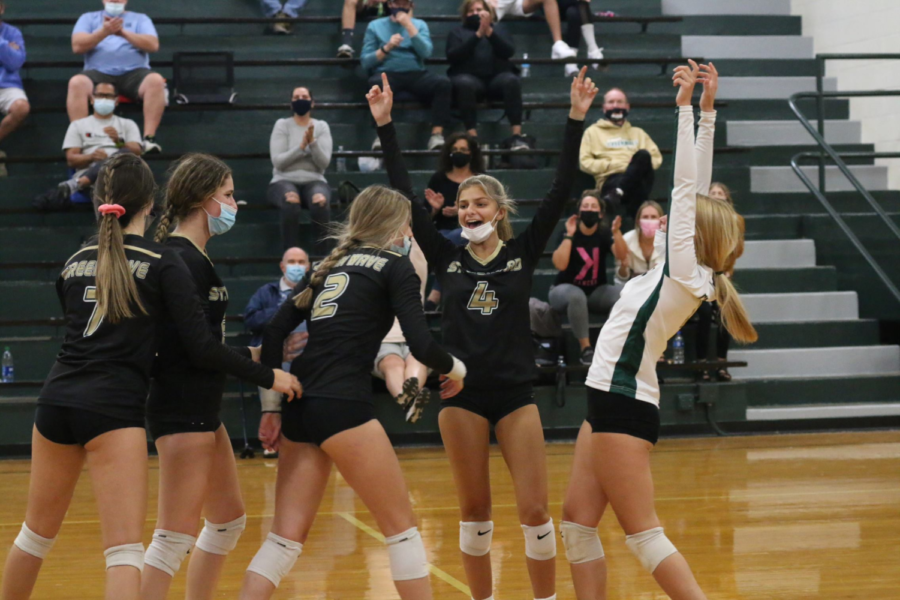 The Girls Volleyball 2021 season has been in full force and it is hard to believe that it is almost over. One of the all-around greatest memories so far is during tryouts when everyone had to pile into the locker room because of tornadoes. It has been kind of a season of adjustment for the JV team because they have gotten a new coach partway through the season, but through all of the ups and downs, it has only made them better as a whole and a more efficient team. The JV team took 2nd in their first tournament. The Varsity girls took 3rd in their first tournament and 1st in the sliver bracket in their 2nd tournament. The freshman team is learning how to work together and mesh as a team while they are also building new friendships. Freshman Ashley Gomez says that she has learned from upperclassman not to take a moment of the season for granted because it goes fast. Currently, the Varsity team is 1st in the Metro Suburban East Conference. Senior middle Maddie Pogorzelski continues to lead with the most blocks this season. Senior Spotlights: Kailey Treiber, outside hitter, says the best advice she can give to underclassman is “you’re only in the moment once, don’t waste time worrying about how you could have done something, but instead put more effort into how to do the next thing.” She also says her favorite part is how your teammates become your family.  Brooke Biggins, setter and right-side hitter, says the best advice she can give to underclassman is to “never miss your serve because froggies are a terrible punishment.” She also says her favorite part is the rush you get when you get a kill. Kate Draftz, libero, says the best advice that she can give to underclassman is “to enjoy it while you can, even the annoying parts like conditioning and setting up the net. Play to have fun, obviously. It is nice to win and you should play hard and try, but don’t forget to have fun and make the best out of it.” She also says her favorite part is working as a team, gaining friendships with teammates. Maddie Pogorzelski, middle hitter, says the best advice that she can give is “when you make a mistake, it is ok and you shouldn’t beat yourself up about it because everyone makes mistakes.” She also says her favorite part is being able to play on a team that is all working towards the same goal.