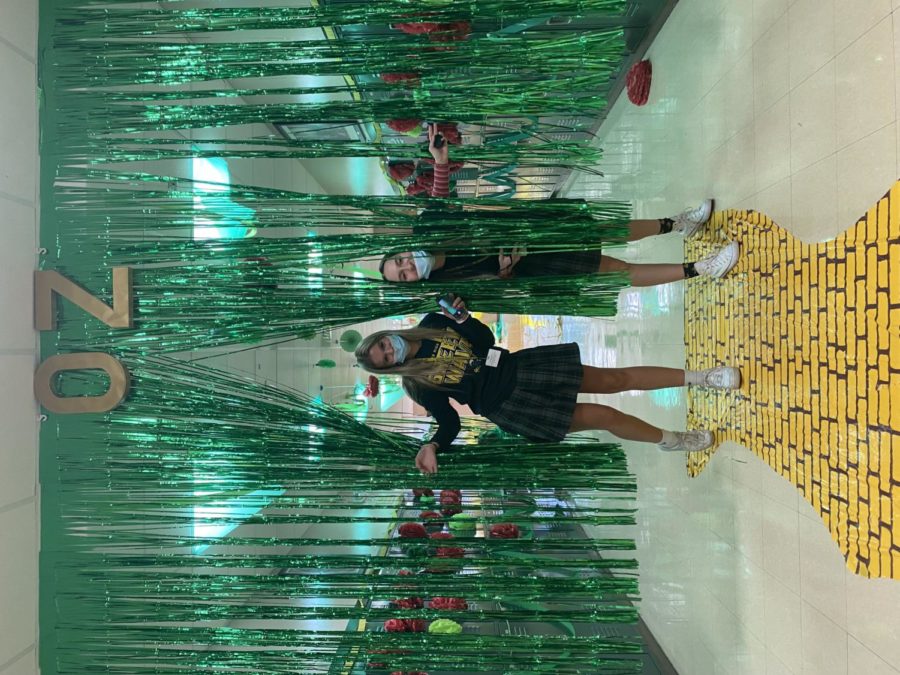 After a year without normal homecoming festivities, we were finally able to hold our annual homecoming at St. Edward this year. Here is what went down. This year’s homecoming theme was the Wizard of Oz (There’s No Place like Homecoming). Homecoming week started off on Sunday with the class hall decorating. Each class was to decorate their hallway according to their assigned theme. The freshmen were “Twisters in Kansas,” the sophomores were “Munchkin Land”, the juniors were “The Witch’s Palace”, and the seniors were “Emerald City.” Then at the football game on Friday, it would be announced who won best hall. On Tuesday, the spirit week dress-down started. The theme for Tuesday was “Dad Day.” Students dressed up like their dads and went all out. On Wednesday, the theme was “Tacky Tourist,” students dressed up in their wackiest tourist gear. Also, on Wednesday night, the seniors had their class movie night where they watched Shrek 2. Then continuing the week on Thursday, the students dressed down in either their favorite Wizard of Oz character or in their class color or shirt. Later, that night, it was the boys’ soccer senior night. “Even though it was sad it was my last game at St. Edward, I was grateful I got to play one last time there,” said senior Robert Wilson.

On Friday is when many of the events took place. The day started with all in-person Mass. Then, once classes were over, students gathered at the field for the Pep Rally. The Pep Rally started off with a performance from the varsity cheerleaders. “This was my favorite homecoming routine that I have done in all four years. It was so much fun to perform,” said senior Emily Sarullo. After the performance Coach Rolando spoke encouraging words to all of the students for the big game later that night. The St. Edward student band also played throughout the entire pep rally to entertain students while watching the events. The junior varsity cheerleaders then performed their homecoming routine that was “wicked witch” themed. To conclude the Pep Rally, it was time to announce the St. Edward 2021 Homecoming Court. The ladies on the court were:  Madeline Pogorzelski, Delaney Lutzow, Brooke Biggins, Kailey Treiber, and Izzy Kirkwood. The gentlemen on the court were: Kyle West, Tyler Brieger, Robert Wilson, Ryan Sauceda, and Max Kaufman.

Later, that night was the big homecoming football game with the theme of “follow the neon brick road.” The St. Edward student band played throughout the game with St. Edward alumni joining them as well. During halftime, the cheerleaders performed their routine for everyone at the game and the hallway decorating winners were announced. The juniors came in first place, with the freshmen in second, sophomores in third, and sadly, the seniors in last.  Also, during halftime, the Homecoming King and Queen were announced. This year’s Homecoming King and Queen were Tyler Brieger and Delaney Lutzow. The night ended with a big football win! Saturday day was the Homecoming dance. This year the dance was held at St. Edward, in the gym, where it was decorated with a lot of Wizard of Oz props. The students were all given refreshments and snacks to take on their way out. “The dance was actually a lot of fun, it was great to see everyone dancing,” said Morgan Poole. I hope everyone had a great homecoming week because there is no place like home.