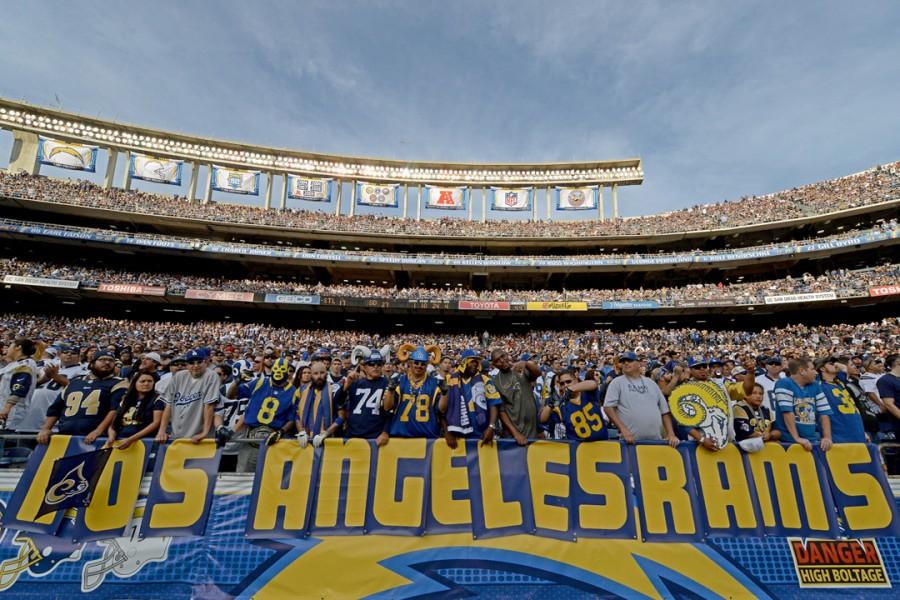 The Rams return to their Los Angeles home after over 20 years in St. Louis

The year is 1946. Jackie Robinson makes his professional debut, Marilyn Monroe is at the height of pop culture, George W. Bush and Bill Clinton are both born, and the National Basketball Association is created. While all that is happening, the Cleveland Rams leave the harsh winters of Northern Ohio for the warm beaches of Southern California, becoming the first NFL team in Los Angeles. Their tenure in L.A. continues for nearly 50 years until they move to St. Louis after the 1994 season. Now, after 20 years, the City of Angels is getting their team back.

Los Angeles Mayor Eric Garcetti, very excited to have the NFL return to L.A., said, “Today, with the NFL returning home, Los Angeles cements itself as the epicenter of the sports world.” He also added, “We cannot wait to welcome the Rams, and perhaps others soon, as they join a storied lineup of professional franchises, collegiate powerhouses and sports media companies.”

The Rams aren’t alone in their desire to move to Los Angeles, with the Oakland Raiders and San Diego Chargers also applying to move there. While the Rams are the only guaranteed franchise to make the move, the Chargers and Raiders aren’t completely out of luck. The Chargers have the option to join the Rams in L.A. in the next year. If they decide to stay in San Diego, the option then goes to the Raiders. The Raiders also called Los Angeles home until they, too, departed in 1994 after twelve seasons.

Los Angeles, being one of the largest cities and media markets in America, is no doubt glamorous and very enticing to NFL owners, but the move still comes as a bit of a surprise. St. Louis was by no means ready to let the NFL leave their city. They were planning a $1.1 billion new stadium to try to convince the Rams to stay put, but Rams owner, Stan Kroenke, wasn’t impressed enough to stay away from L.A. The Rams also have to pay a $550 million fee because of the relocation.

“We understand the emotions involved of our fans,” Kroenke said. “We made a decision and worked long and hard at the various alternatives. When they didn’t succeed, we worked this one to this point.”

While the NFL has been missing out on a potentially enormous market in Los Angeles, it isn’t always in their best interest to relocate franchises away from supportive fans, even if they are in a smaller market. That has led them to making offers to the Chargers and Raiders, trying to make staying put an easier pill to swallow. They are willing to give both the Chargers and the Raiders $100 million towards new stadiums if they stay in their respective cities.

As for the Rams, they have a lot more to worry about than whether or not they’ll have another franchise to share the city with. The new Los Angeles Rams have to secure a stadium to play in, find a practice facility, and transfer all of their equipment to that facility. They also have to find West Coast based sponsors since most of their former sponsorship deals would only work in the Midwest. Also, all of the people remaining within the organization have the tough task of transporting their current lives half way across the country.

After all of that is complete, the Rams front office has the hardest job of all: fielding a team competitive enough to capture the attention of an impatient Los Angeles crowd. They have to show the fans that they can recreate the excitement that Eric Dickerson brought in the 80’s and reproduce the success that Kurt Warner and The Greatest Show on Turf had with the St. Louis Rams in the early 2000’s.

A lot has changed since 1946. Jackie Robinson is considered one of the greatest players of all time due to both his play on the field and his role in reducing the racial barriers in baseball. Marilyn Monroe is remembered more for what could have been rather than what was. George W. Bush and Bill Clinton have both grown up to become successful leaders of America. The NBA is no longer a fledgling sports league, but instead one of the most successful sports leagues in the world. One thing that hasn’t changed is that the Rams call Los Angeles home.