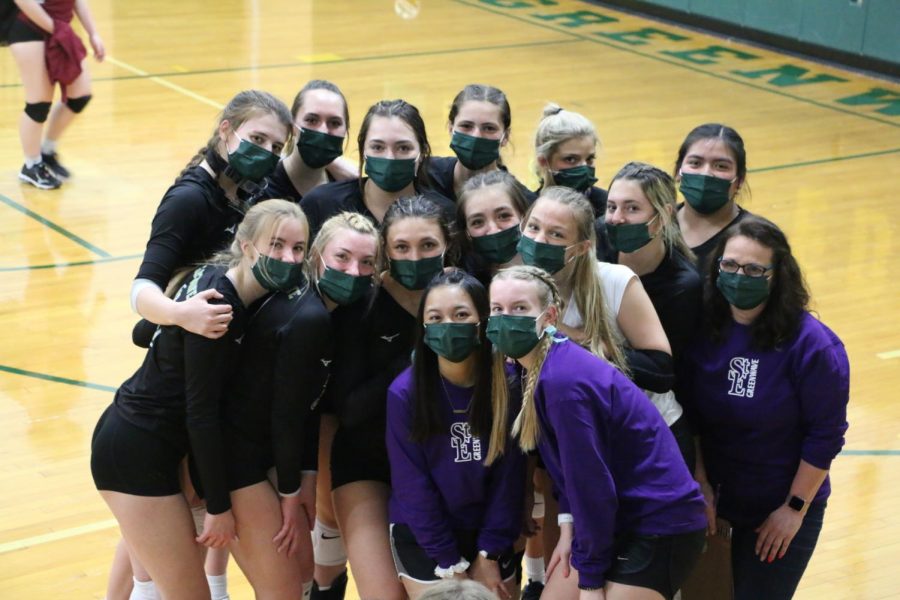 The Girl’s Varsity Volleyball team was able to have a short six-week season this year. The girls were required to wear masks during their games and practices. Though it may have been annoying, the girls did not complain because they were grateful to even have a season. Tournaments were something the team was not able to have at all.

The Varsity team had two amazing managers, Andrea Rivera and Maddie Anderson, who took over stats, the social media page, and Jimmy John’s fuel for the team! “We made the most out of our situation” Andrea Rivera noted.  The girls had games back to back every week, reaching sixteen games total. One of the big events that the team was able to have was a Senior Night, where parents of the Varsity players were allowed to watch in the home gymnasium. The underclassmen and parents decorated with streamers, balloons, banners, poster boards, and action shots.

Sophomore Paige Anderson said,  “When Covid hit, for volleyball lots of things changed; for example, the season was shorter even though with this condensed time. Our team made the best of it and continued to get closer with every game. It also pushed us to work harder for our goals”. The girls’ overall status was 6-10. Coach Dawn Gross believed that if the team had more time, they would have been able to win many more games. To finish off the season, the Varsity parents, (especially Mrs. Wright) put together a dinner after the last away game to honor the seniors. “It was a fun way to end the short season. I’m really going to miss the seniors, each one of them influenced me on and off the court,” said junior Delaney Nolan.

Another senior, Rebecca Wright, said “Fans were not able to come and support us, parents were only allowed to come and watch towards the end of the season and the team was limited to only so much freedom in what they got to do. I am grateful though on the other hand because it did make me better understand what teamwork means. It made me realize why I play the sport in the first place”. Although Volleyball may have looked completely different this year, the seniors were thrilled to play with their teammates for one last season!