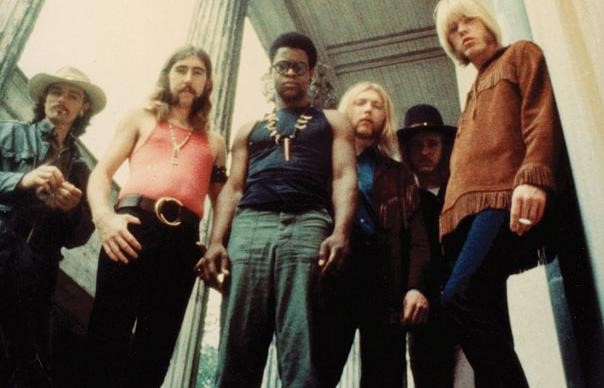 For our first edition of “Throwback Record,” we’re going to take a look back at the quintessential live album At Fillmore East by legendary southern rock pioneers, The Allman Brothers Band. The Allman Brothers, consisting of band leader, slide, and lead guitarist Duane Allman, keyboardist and singer Gregg Allman, bassist Berry Oakley, guitarist Dickey Betts, and dual drummers Butch Trucks and “Jaimoe” Johanson, formed in Jacksonville, Florida in 1969. After morale ran low in their past two bands, prompting them to break up, brothers Duane and Gregg Allman fled back to their home state of Florida to form a new band that would combine elements of country, rock, jazz, and blues. With each new talent being added to the ensemble, the band slowly started to take shape as they tirelessly toured across the South, garnering loyal and eager fans with each new club they played. After releasing two albums, their self-titled debut and Idlewild South, they realized that their studio work wasn’t getting the attention they wanted; they saw that their live shows were gaining a lot of traction so Duane decided that their third album should be a live one. The album was recorded in a two-day stint- March 12 and 13- at the Fillmore East, which was a popular venue for up-and-coming bands at the time. At the time of its release, the Allmans didn’t think anything of it, but they never would have expected At Fillmore East to become the best live album ever released.

The album kicks off with Fillmore East announcer Michael Ahern welcoming the  Brothers to stage and they quickly switch gears and kick off the concert with the dynamic “Statesboro Blues.” Duane Allman rips a gritty slide guitar intro as the rest of the band plays under him, complementing his phrasing and sudden pauses with unison reinforcement of bass, organ, guitar, and drums. The song then slips into a straight, dirty blues groove: Butch and Jaimoe lay down the same beat, every now and then adding their own embellishments as Berry Oakley’s punchy bass lines, Dickey Betts’s bright guitar, and Gregg Allman’s stirring organ cushion the continuation of Duane’s nasty slide solo. A minute or so into the song, Gregg takes over vocal duties, using his soulful voice to tell a tale of being down in the dumps: he confesses, “I woke up this morning, I had them Statesboro Blues… I ain’t good looking baby, but I’m somewhat sweet and kind.” After Duane tears up the atmosphere with his slide once more, Dickey swoops in and assumes Duane’s position, ripping a melodic-but-filthy solo, leaving no fluff or fat behind for eager fans to pick up. The song ends with the band grasping onto the same note; the two drummers raddling their cymbals as Gregg’s demanding organ beautifully over-shadows the rest of the instrumental.

Going on from the show-stopping “Statesboro Blues,” the Brothers somehow manage to ignore all live music limitations and transcend themselves to a cosmic realm of playing that most bands didn’t even know existed; their musicianship was so good that it helped them get to a level of playing that most bands couldn’t dream of one day attaining. The best part about At Fillmore East is how the band drew influence from the jam band world and didn’t conform to the popular song structure of the time; a vast majority of the bands and artists during the ’70s restricted themselves to 3- to 4-minute long songs; they didn’t want to make anything that would challenge the listener. They would follow this same formula live. But for some bands, like Grateful Dead, Led Zeppelin, Santana, and The Allman Brothers Band included, they would overlook these norms and instead jam and improvise over a simple chord progression, shifting the tempo and key every now and then to keep the listener engaged and interested. These jams could last from 10 minutes to half an hour or even longer. The whole point of these lengthy improvisational jams was to see how far a group could explore musically; to see if they could transform themselves from a couple guys jamming into an invisible and euphoric force of nature.

At Fillmore East was never intended to become a hit, but it did anyway; no singles from the album were released and there was no extravagant promotion from their record label, just 72 minutes of straight dirty psychedelic jazz and blues. The album brought the Brothers worldwide acclaim and shot them up to the stratosphere, but everyone knows that good things aren’t meant to last; a couple months after the album was released, Duane Allman died in a motorcycle accident and a year later, Berry Oakley was also killed in an eerily similar accident. The Brothers dealt with the tragedy though and were able to move on, but not with the same force they once had, but, in a parallel universe, if they were only to release At Fillmore East, I wouldn’t complain.