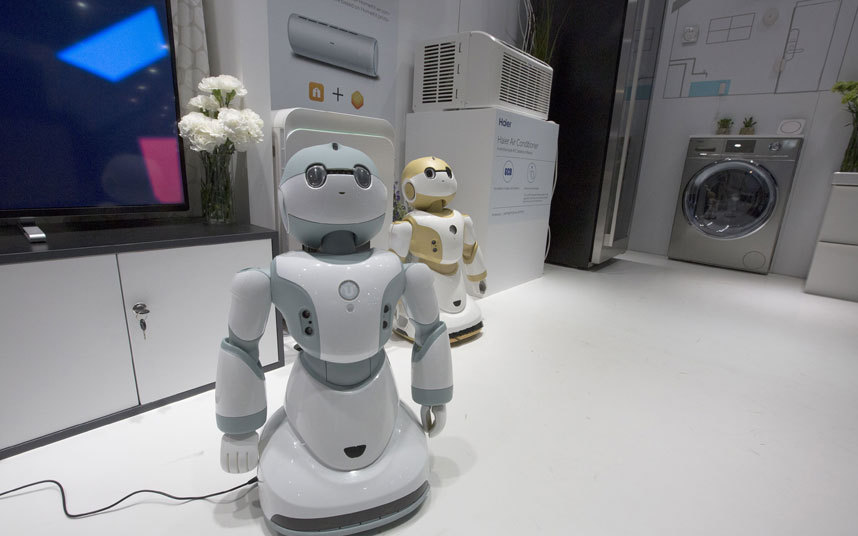 Haier Ubot household robot is a very special robot, being able to communicate with Haier Ubot washing machines and fridges. Other features include home intruder and gas leak detections and games and stories to keep kids occupied.

With the Consumer Electronics Show showcasing around 3,600 presenters this year, new gadgets that make life easier and silly things that no one really needs always pop up. Almost everything how has an internet connection, making anything possible. This year’s CES is being held in Las Vegas, Nevada on January 6, and the new tech is stunning.

Cars are advancing. Of course all the big phone and internet companies will be there, but Ford, GM, Volkswagen, Kia, and BMW are also making appearances. Driverless vehicles are the new thing, and we just may get a taste of that with Ford and Google teaming up, possibly showcasing the world’s first driverless vehicle. Volkswagen will also be debuting its newest feature: electrically powered cars, with Kia also showcasing its autonomous driving strategy. All the car companies will also be integrating wireless connections that give drivers a better idea of their and other drivers’ positions on the roads and internet connection for wireless devices.

Another thing that soon could become a fad in the United States is Chinese smartphones. Already selling smartphones in the United States, ZTE, Alcatel, Letv, and Huawei are stepping up their game in the U.S. technology industry. Alcatel holds the No. 5 position in the U.S. smartphone market, but with consumers having a wider variety of phones to choose from thanks to phone industries leaving behind contracts and better payment plans for phones, they may be able to work their way up the market.

L’Oreal, the company known for makeup, will be at CES. Everything including appliances, kitchen gadgets, water bottles, pens, cutlery, and clothes will all be making appearances and unveiling possibly important advancements in tech. The cute little Haier Ubot household robot is one of the most hit or miss products showcased; great advancements and help around the house may draw consumers in initially but the price may turn them off.

With so many presenters, CES will most definitely bring mind-boggling and silly technology to the table. All the new tech is a great way to start off the new year and find new trends before they start.