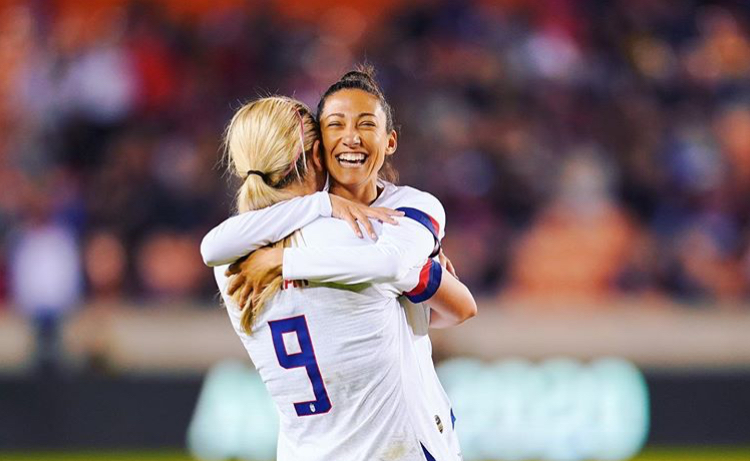 On Friday February 7, the US Women’s National team secured their spot in the Tokyo Olympics with a 4-0 win over Mexico. This was the semifinal of the CONCACAF Women’s Olympic Qualifying tournament and it was their fourth win in the tournament.

They started off on Jan 28 beating Haiti 4-0 and then went on to beat Panama 8-0 on Jan 31. Midfielder Lindsey Horan earned her first hat trick of her career that night with goals in the 3rd, 18th, and 81st minute. They then went on to face Costa Rica on Feb 3 and beat them 6-0. Sam Mewis and Christen Press led the game with 2 goals each. Christen Press is the 5th woman in USWNT history to score in 6 games in a row and her teammates as well as fans are proud to see her get the well deserved playing time. “I’m happy to be helping the team and be on the field and doing what I love. It’s as simple as that,” she explained to TIME magazine.

Their win against Mexico on Friday qualified them for the Tokyo Olympics but they still had one more game to win the tournament. The final against Canada was played on Feb 9 and Canada was definitely their toughest opponent. Both teams had been undefeated in the tournament but after a scoreless first half, the US ended up beating Canada with 3 goals in the second half.

The USWNT has won 4 Olympic gold medals and 4 World Cup tournaments and they are strong coming off their World Cup win in July 2019. After losing to Sweden in the 2015 Olympics, the women are surely going to be working even harder for that gold medal this year.

As for the roster, nobody is quite sure who new head coach Vlatko Andonovski has in mind. The 23 women from the World Cup roster will not all be selected, considering the Olympic roster only has 18 spots. In my opinion, I think it’ll look fairly similar to the World Cup roster. I’m hoping for veteran players Ali Krieger and Ashlyn Harris to make the roster. Ashlyn Harris certainly has a good chance since she is one of three goalkeepers on the team. Ali Krieger is arguably one of the best defenders on the team so hopefully she’ll make the roster as well. It is probable that Becky Sauerbrunn will be another defender on the roster. For midfielders, I’m thinking Rose Lavelle, Sam Mewis, Julie Ertz, and Lindsey Horan will be on the roster. And for forwards, it is almost a given that captains Megan Rapinoe and Carli Lloyd will be on the roster. Besides them, I think Christen Press and Tobin Heath will make it. Alex Morgan is expecting her first child in April and hopes to be back in time to make the roster as well.

The Olympics begin in Tokyo on Friday, July 24. Be sure to tune in to watch some of the world’s best athletes compete for the gold!