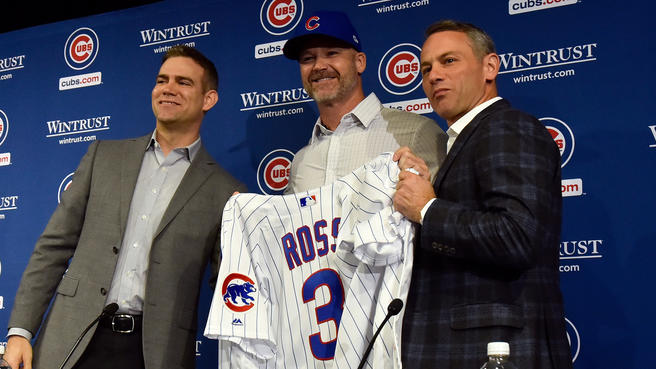 Former catcher for the Cubs, David Ross is putting his jersey back on for an exciting reason. 3 years after his retirement at the end of the 2016 season, it was announced that Ross will be filling the role as manager beginning in the 2020 season. After his retirement, he remained with the Cubs as a special assistant to baseball operations, and he was also an analyst on ESPN broadcasts. He is very excited to be back with the Cubs full time. “I’ve had an eye on this my entire career,” he said to the Daily Herald.

The Cubs had two formal interviews with Ross and decided that he is a better fit than the five other candidates. “We believe David has truly special gifts as a leader and that he’ll become a great manager,” Cubs President Theo Epstein explained. Despite his lack of experience as a manager, Ross has a heart for the Cubs and his goal has always been for the team to succeed. “David has always been very aware of the ingredients, all the little things that are necessary to create a winning environment,” Epstein said.

David Ross’s career as a player ended on a high note after their World Series win in 2016, but he is not dwelling on the past. “It’s not about 2016, it’s about the expectation of winning,” he said about his goal to win again. “I want to win a championship. I want to win multiple championships. I want to bring a championship back to Chicago, and we’ve done that before.”

He signed a three-year contract with the Cubs and he is very excited to work with the team and learn more about managing. A majority of the coaching staff will stay the same, but Ross is looking to hire more coaches that will hopefully make the team even better. Fans are excited to see Ross back with the Cubs and looking forward to the 2020 season.