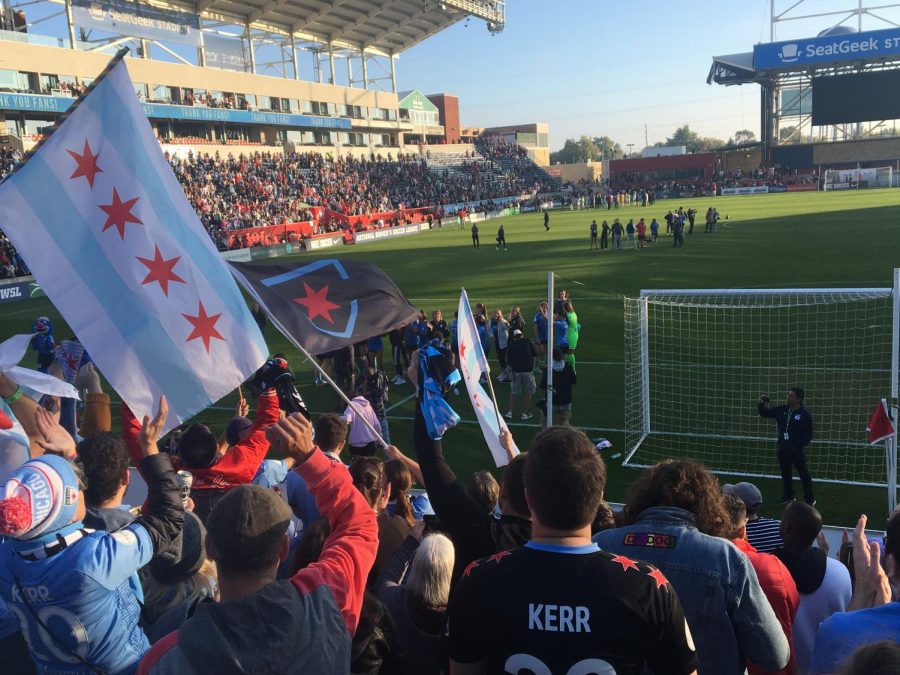 On Sunday, October 20, over 9,000 fans watched the Chicago Red Stars win their semifinal as they beat the Portland Thorns 1-0. This was their fifth consecutive semifinal game and their first win. It was especially exciting considering their 0-1-1 record against the Thorns this season. The game took place at SeatGeek Stadium in Bridgeview, the Red Stars’ home stadium.

The Red Stars ended their regular season in 2nd place out of the nine teams in the league and fans were hopeful that they would do well in the playoffs. When it was announced that the Red Stars would be hosting the semifinal game, fans were very excited to pack the home stadium one last time for the 2019 season. Fans filled just under half of the stadium’s capacity for the final game of the season. This was the 2nd highest attended home game this season, coming short of the over 17,000 people that attended their game against the North Carolina Courage on July 21.

After losing 5 previous semifinal games, the team was excited to have another shot at making it to the final. “Everyone just kind of came back with a different mentality that this was going to be our year,” striker and 2019 NWSL Golden Boot winner Sam Kerr explained. “We so thoroughly deserve to be there and I’m so happy to be a part of it.”

The team proved how much this truly meant to them early on in the game. Kerr was assisted by Yuki Nagasato to score in the eighth minute. This early lead helped them, even when the Thorns began to gain momentum in the 2nd half. The game ended with a final score of 1-0 and both the players and fans erupted into celebration.

Though the team has reached a milestone worth celebrating, they are going into the final with determination and hoping they can bring home the victory for themselves and for Chicago. “I love Chicago, I love my teammates, and to have that amount of support today and all season, it’s been unbelievable,” Kerr said. “But you know there’s one more game left, so let’s do it.”

The Red Stars unfortunately lost the final game 4-0, but fans are still very proud of them for such a successful season and hopeful for an even better 2020 season.