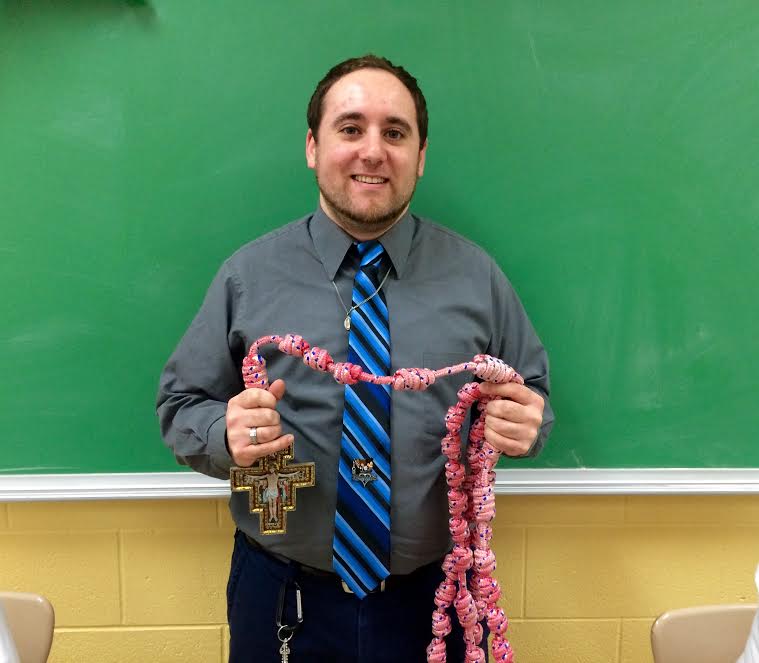 It all started in St. Paul, Minnesota where Mr. Lavorata grew up.  He spent his early childhood playing in the Mall of America, exploring LEGOLAND and riding the Screaming Eagle in the mall’s indoor amusement park.  He then moved to Illinois where he went to Jr high and high school.  His passion for Theology was always prevalent in his life but, he didn’t always want to be a Theology teacher.  In his early childhood he dreamed of being a paleontologist, like most youngins he had an obsession with dinosaurs, his next option was to be an international spy.

Mr. Lavorata knew that dinosaurs weren’t in his future but rather that he would turn his faith into a career. When asked if he always wanted to be a Theology major he responded. “There’s so much to theology and it approaches many of those ‘deep’ questions in such a reasonable way. Catholic Theology allows us to see the world in light of truth and meaning, and I want to be a part of that journey.” He studied at the University of St. Francis in Joliet, IL. He majored in Theology with a concentration in Religious Education, Pastoral Ministry, and Youth Ministry. He also minored in Philosophy with a concentration on Eschatology and Psychology concentrating on Personal Psychology. After his time in Joliet he started as a Peer Minister in St. Elizabeth Ann Seton. While he was a Peer Minister he studied at the Franciscan University of Steubenville, OH. He received his masters in Theology and Christian Ministry there.

Mr. Lavorata’s personality is what makes him such an intriguing teacher. Since the first day with him our senior class knew this year would be interesting. Mr. Lavorata not only has character bursting from the seams but, a unique taste in hobbies to match. Mr. Lavorata spends his free time as a Dungeon and Dragons enthusiast. He enjoys escaping reality to join his warlock allies. You can catch him in his favorite class Paladin. In and out of the classroom he is a heavily-armored defender of the innocent and upholder of righteousness. By day he is Theology teacher Anthony Lavorata and by night he delves into his alter ego Ember, a level 5 Genasi Warlock. His ambidextrous talents save him time and time again. He holds his sword with one hand and shoots fire with the other.

Mr. Lavorata takes the game seriously and can interpret the many challenges of Dungeons and Dragon’s into real life experience. “ I would say it’s important to remember that you are in a group with other PCs (Player Characters) who have talents different from yours. It’s a group game and therefore imperative to rely on other’s actions and advice. In addition, just like video, tabletop, and athletic games, RPGs are a social interaction game that encourages and fosters teamwork for a common goal and often leads to lifelong, meaningful friendships.”