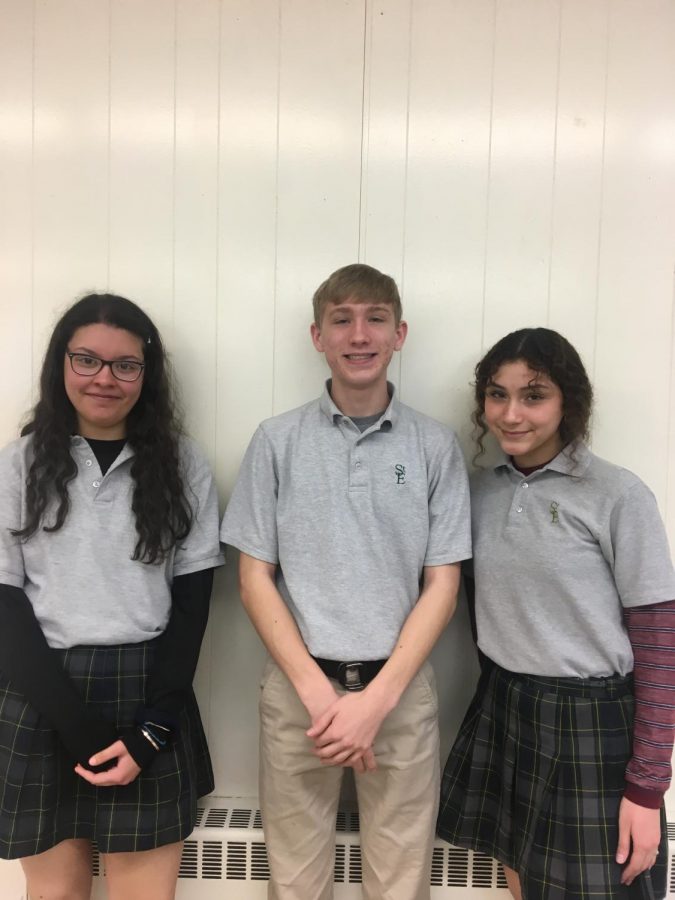 Here are some of the sophomores that gave their opinions on this topic.

Yes, our parents ultimately decide what type of school we go to: either private or public. But what do we think about these two types of schools? I sent out a quick survey to the sophomore and junior classes here at St. Edward asking some questions about this topic. The responses pointed out things from both perspectives. Some of our fellow students here at St. Edwards came from public school and have never been to a private school until high school. On the other hand, we have students who have been to private school their entire lives. Between the sophomore and junior classes, 77.8 percent of students have been to only private school, 20 percent have been to both private and public schools, and just over two percent of students have only been to public school before coming into high school. What exactly is the difference between a public school and a private school?
Of course, private schools tend to be more expensive with tuition. Private school can cost from 5,300 to 25,180 dollars according to a report from the NCES. Uniforms are also something else you need to purchase for some private schools, which can become pricey. Public schools are usually free besides some minor things like lunch or bus transportation. Something these two have in common, money wise, is athletic/sport fines which is needed to be able to join sport teams for your school.
Speaking of uniforms, students had a lot to say about them in the survey. “Uniforms aren’t as bad as some people make them to believe,” said sophomore Ariel Martinez. There are definitely some positives about wearing a uniform, like not having to worry about what you are going to wear. In private schools, everyone is wearing the same thing so there is no need for people to compete with each other over who has more expensive things.

“I don’t want to wake up in the morning and have to worry about what to wear. I don’t have time for that, I’m usually late,” said sophomore Joanna Macias. On the other hand there are students who would rather wear casual clothes, but worry about the school being really strict on dress code.
In my survey, many students brought up the fact that public schools have more students than the average private school. On average, public schools have about 25 students per class and private schools have about 19 students. “I think that public schools have more diversity in people and more privacy because there are so many students that attend. In private schools like ours, everyone knows everyone and rumors will get around more easily,”said sophomore Julie Espinoza. Some students said they wish our school had more students but others feel that having smaller classes as an advantage. “I think that being in a private school is very beneficial because it’s smaller and the teachers have more time to help everyone.”
Everyone who goes to a private school know the grading scale between private and public school are different. An A for private school is a 93 percent and an A for public is a 90 percent. “Since private schools are expected to have a higher grade average, the tougher grading scale shows colleges that we are more prepared for college. Because colleges know about the different grading scales it will make them more likely to accept kids from private schools,” said sophomore Sammy Shepherd. Having a harder grading scale really keeps students responsible and on task with their school work.
I have been to both public and private school, and I honestly prefer private school. Being in a private school I feel like a have more confidence being in classes without so many students. I like having the more one on one feeling with teachers in classes, and getting the help I need. Yes, the grading scale is higher, but I feel like this pushes students to try harder and to try their best to do well in school. I do like having all the options a public school has open to us, like certain sports and classes. There are always going to be some ups and downs in both schools, and everyone is going to have their different opinions on both as well.