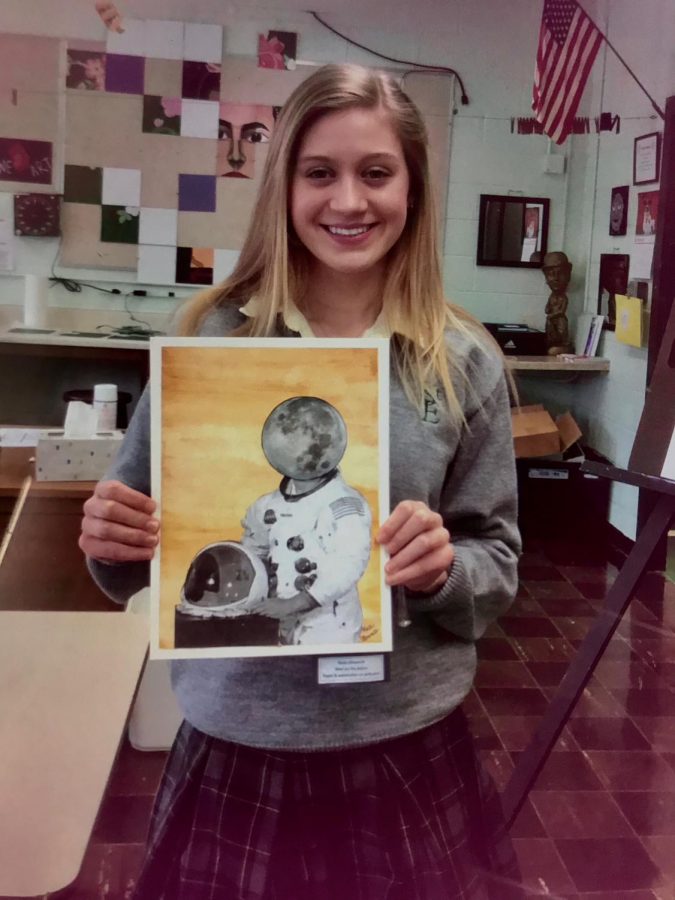 Senior Katie Ellsworth holding one of her art pieces about the moon landing.

Neil Armstrong is known for being the first man to step foot on the moon—that is, if he actually stepped foot anywhere besides a movie set. Conspiracy theorists have been convinced for over four decades that the entire moon landing was a hoax created by the U.S. government in order to win the space race against Russia during the Cold War. They believe that instead of making a trip to the moon, (a slim 0.0017% chance, according to Bill Kaysing who wrote an entire book devoted to the conspiracy) the landing was faked on a secret film set, located either in the Hollywood Hills or within Area 51.

There are many pieces of evidence that lead people to believe that the moon landing was faked. As previously mentioned, the U.S. and Russia were in competition to see who could get to the moon faster, in order to prove who the dominant country was. Conspirators believe this is what lead to the moon landing hoax. However, in order to get to the moon, NASA needed to come up with a way to get past the Van Allen radiation belt. This is a naturally occurring belt of extremely high radiation wrapped around the Earth. Due to the amount of radiation, the astronauts wouldn’t have been able to pass through the belt without dying during or shortly afterwards, leading conspirators to question how they allegedly passed through.

Pictures and video footage are only available through NASA, meaning there’s nothing else to prove whether or not NASA faked them. Senior Katie Ellsworth believes that NASA’s photographic evidence is one way to prove the landing never actually happened, “Let’s think of the photos of the moon landing. One of the first things that comes to mind is the American flag perfectly blowing in the wind. But why would it be waving it’s in the middle of space? NASA’s excuse for the moving flag was that it was rolled up and then unraveled, making it ripple as if wind was hitting it, but something tells me when you unravel a flag and put it on the moon it shouldn’t look like it’s waving.” Also in many photos taken on the moon, you’re able to see crosshairs scattered across the image. A crosshair is a cross in the center of a camera lens that appears in photos. One detail that a lot of conspirators have pointed out is that some of the objects in the images are in front of crosshairs. The only way an object can be put in front of the crosshairs is if it was placed there, such as Photoshop. According to conspirators, NASA’s photographic evidence seems less than credible, to them, the landing looks closer to a movie set than the moon. Another thing many conspirators argue is that when looking at pictures of the moon landing, they are able to make out things such as stage lights, props, and more in the reflections of the astronaut’s helmets. “You can see glares from the astronaut helmets and inside the glares you can make out things like movie cameras, set props, and stage lights” Ellsworth stated.  Something else that conspirators have pointed out is that “There are no stars in the background of any pictures” quoted by Ellsworth. Overall, yes NASA has released video and photographic evidence of the moon landing, but in the eyes of many conspirators, NASA’s evidence does not take long to poke holes through.

In late 1967, the chances of the U.S. actually making it to the moon looked slim. Nothing was working properly, early missions were being repeatedly delayed, and everything seemed to be in panic mode. Former astronaut of Apollo 1, Gus Grissom, was very vocal about not thinking they would be able to make it to the moon. Because he was so vocal about his disbelief in getting to the moon, it made the country look bad. Conspirators believe because of this, NASA had a vendetta to take him out. Grissom abruptly died in an apparent Launchpad fire in the pre-test launch of Apollo 1. You would think NASA would take more precautions for a test launch, considering these were supposed to be the first people to make it to the moon. NASA needed to silence a voice that was a threat to their whole operation. Conspirators assume that his death was planned to keep silence about the creation of the moon landing hoax. Because of the death of Gus Grissom, NASA hired astronaut, Neil Armstrong, who is famously known as the first man to step foot on the moon.