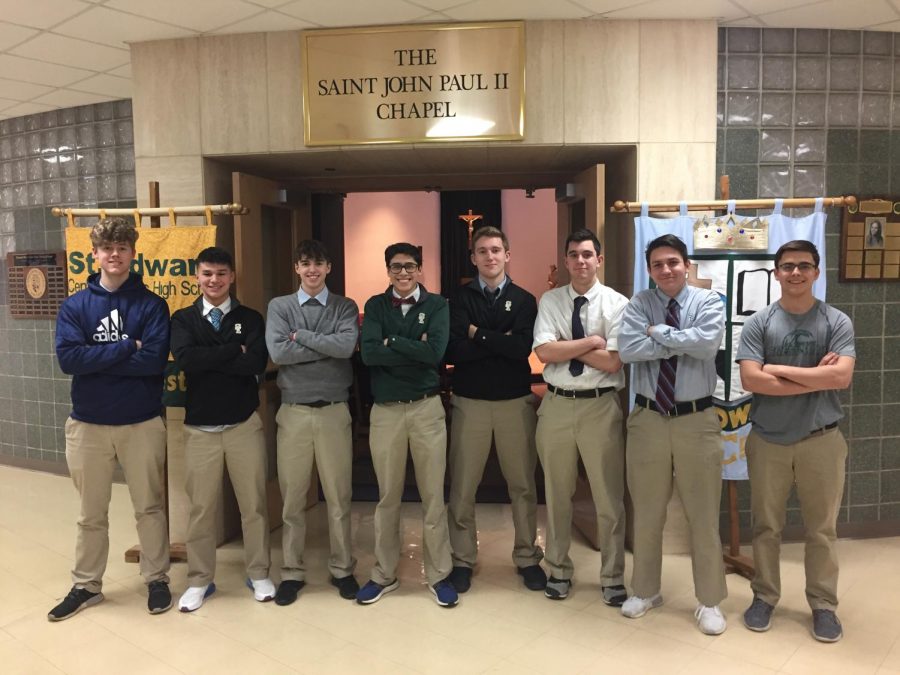 Senior Baseball Players excited for the new season ahead.

St. Edwards High school has recently just found a new head coach at the varsity level of baseball. Coach Mike Rolando will be filling the role as the head coach of baseball this year. This will be his first year as the head coach of baseball, but the St. Edwards athletic programs know his name well, as he was and still is the head coach of football at St. Edwards. I interviewed coach Rolando about how he hopes to affect the team, Rolando stated “We have some talent so our job is to instill confidence in the boys and have some fun so they can be as successful as possible.  My expectation is a competitive and respectful team on and off the field, and that plays the game the right way.  Our goal will be to win the most games in program history and bring a Regional Plaque back to St Ed’s.  We’ve got a lot of work to do to get back to that level but I know that’s what the boys want.” It’s obvious that Coach Rolando expects much from his team, and wants them to act like men when it comes to winning and losing respectively, as well as the fact that he has made his goals clear of what he’d like to accomplish in the next couple of years.

Being the Head Coach of two varsity sports at the high school level must be loads of work and hard to keep up with. I asked Coach Rolando about how he feels about the subject of the almost overwhelming amount of time that he will have to spend now that he has two teams to manage, Rolando explained “I am excited to coach a new group of kids, have some fun, and hopefully teach some life lessons along the way.  I was the head softball coach for several years not too long ago and have managed a busy family life along with coaching several sports including baseball for the past eight years. Our family is a sports family so I’m sure we’ll all make it work.” It seems that Coach Rolando will be able to manage all the work with his extensive past experiences, as well as the backing and support of his family in the process. It’s also good to see he will be receiving much needed support from his family, and they back his decision all the way through.

I finally asked Coach Rolando on whether or not he was able to get to know his team during the offseason. He responded “I’ve been in contact with them all, had an off season meeting, and I’ve been able to watch them at some open gyms.  I get more and more excited to coach them every time I see them so I’m looking forward to getting the season started and getting to work.” Coach Rolando has worked hard in getting to know his team and adapt to the different sport, and has done well in getting in touch with his new players, which will hopefully let the players get used to the change in coaching.

One thing is for sure, this baseball season is going to be one exciting event for both the players and the New Head Coach, and we wish them the best on their upcoming season in terms of winning on and off the field.