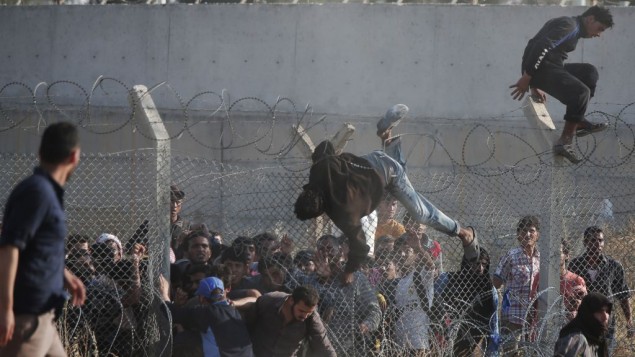 After the tragic attack on Paris, at least 24 United States governors are refusing to accept Syrian refugees due to the fear of terrorism. President Obama believes that the use of religious tests being applied to refugees for refugees that are trying to seek asylum in the U.S. is “Shameful.” “That’s not American,” he said. “That’s not who we are. We do not have religious test to our compassion.” Texas governor Gregg Abbott said his state will not accept refugees from Syria, and he believes all other states should “act similarly.”

An estimated 12 million Syrians have fled their homes since the outbreak of civil war in March 2011, taking refuge in neighboring countries.  According to the United Nations High Commissioner for Refugees, over 3 million have fled to Syria’s immediate neighbors Turkey, Lebanon, Jordon and Iraq.  6.5 million are displaced within Syria.  Women and children make up three-quarters of the refugee population. According to the U.N., more than half of all Syrian refugees are under the age of 18. 150,000 Syrians have declared asylum in the European Union, while member states have pledged to resettle a further 33,000 Syrians.  85% of these Syrians are pledged by Germany. At this rate, the U.N. predicts there could be 4.27 million Syrian refugees by the end of 2015 making it the worst exodus since the Rwandan genocide 20 years ago.

More than four years after it began, the full-blown civil war has killed over 220,000 people, half of whom are believed to be civilians. Bombings are destroying crowded cities and horrific human rights violations are widespread. Basic necessities like food and medical care are sparse. Also, winter clothing is one important thing that most people are forgetting about; winter weather has had a devastating effect on displaced Syrians since the country’s civil war began four years ago. Snow blanketed refugee camps across the region in previous years and frigid temperatures created concerns about the health of refugees who lacked access to warm clothing and secure shelter. In early January, three Syrian refugees died of exposure in Lebanon, and the previous November a snow storm in the country killed two Syrian children caught in the cold.

In October, Russia began launching airstrikes at ISIS targets in Syria. This will likely prompt even more Syrians to flee for safety and will make delivery of humanitarian aid to Syrian civilians more difficult. The airstrikes will likely have a major impact on the balance of power in Aleppo city and the North Aleppo governorates, both places where Mercy Corps has delivered aid for the past three years.

Many families decide to leave after family member or neighbors get killed during airstrikes, murders, or civilians being shot due to the soldiers believing they were an enemy.  Also the Syrians want to leave so the young men won’t be kidnapped and forced to fight for the regime. Children have lost family members and all of their belongings, and have had to resort to begging for food. Syrian children (the nation’s hope for a better future) have lost loved ones, suffered injuries, missed years of schooling, and witnessed violence and brutality. Warring parties forcibly recruit children to serve as fighters, human shields, and in support roles, according to the U.S. State Department.

The risks of the journey range from starvation, exhaustion, kidnapping, and being shot for leaving the country.  Many walk for miles at night to avoid being shot by snipers or to avoid being caught by soldiers who will kidnap them. Four million Syrian refugees are still waiting to be registered with the United Nations High Commission of Refugees, who is leading the emergency response.

In December 2014, the U.N. issued its largest ever appeal for a single crisis — according to their estimates, $8.4 billion is necessary to meet the needs of all those affected by the crisis, both inside and outside Syria, an increase from last year’s $6.5 billion. But only 50% was funded on the previous appeal.

Syrians now face increasing challenges to find safety and protection in neighboring countries, which, faced with overwhelming refugee numbers, lack of international support and security concerns, have taken measures this year to stem the flow of refugees – including restricting access or closer management of borders and introducing complex requirements for refugees to extend their stay. “I feel imprisoned here,” said Hind, who lives with her husband and three young children in a storage unit in the northern Jordanian city of Mafraq after fleeing Damascus. Six months ago, their dwindling resources forced them to give up the apartment they were renting. “We don’t go out, we don’t do anything… We have lost any hope we had left for the future.”