Why Students Shouldn’t Slack on Sleep 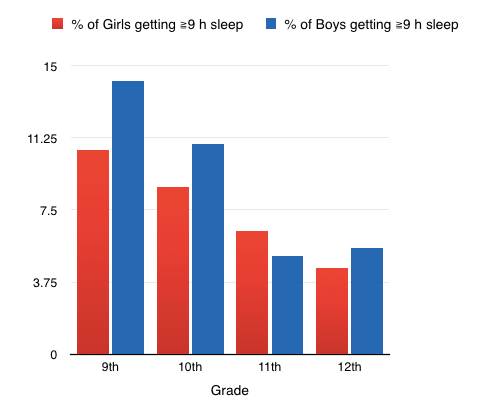 Percentage of Boys and Girls getting recommended amount of sleep.

Well as you all know without sleep it is harder to focus and retain information that you have learned as sleep is used to help consolidate memory. Luke Sauceda a sophomore at St. Edwards had something to say on the matter stating, “I often feel drowsy and sluggish in the morning as I get only about 6-7 hours of sleep each day.” Sauceda is probably one of many that have the problem of feeling this way in the morning because of their lack of sleep.  In a sense sleep is important for doing well in school or any learning environment. The effects of no sleep are very serious and can affect a teenagers grades; sleep deprivation will increase memory problems, influence negative mood swings, and issues with thinking and concentration will occur. Teachers are also concerned when it comes to the amount of sleep students get; when St. Edward teacher Bethany Reed spoke on the matter she stated, “ Sometimes I’ll wake up in the morning and check my emails for homework and see the timestamps on the emails sent, often ranging from 1-4 in the morning, and especially when there is a sport or extracurricular activity involved that will cut into the time spent doing homework, which is worsened by the fact that most games are played on a travel schedule.” And when asked if she is ever over encumbered with work she states, “Yes, even as a teacher with much experience it is hard to keep up with all the work and because of this sometimes I will even lack the recommended hours of sleep.” Sleep deprivation also increases the chances of a car accident because sleep deprivation will cause drowsiness which dulls reaction time putting upper class students (juniors and seniors) who typically drive to school each day at risk. Sleep deprivation can be the cause of a deteriorating health as well. As sleep deprivation can cause a weakened immunity system, higher blood pressure, and an increase in risk form type two diabetes as a lack of sleep will affect a person’s insulin level intake.

Many high school students argue the reasons why this sleep deprivation occurs. Unfortunately it’s just not that simple for high school students. From Research done by Craig Canapari the director of the Yale Pediatric Sleep Center, “The reality is that in high school only around three to fifteen percent of all high school students get the recommended amount per day.” This is simply because the amount of work involved in high school, many students find themselves working till the early hours of the morning each day to catch up on school work. While for athletes this can be even worse. Just take St. Edward senior Jake Kaufman stated that “I’d find myself usually getting around 5-7 hours of sleep each night because of the intense amount of homework. It was the worst it has ever been during basketball season my junior year, I would find myself getting five hours at the maximum as I would do homework till around twelve to one o’clock in the morning.” Obviously trying to balance school and sleep is hard enough, and when you throw a sport into the mix the matter just gets a whole lot worse.

Another thing students seem to do instead of sleep or homework is procrastinate. A lot of the time students will neglect their homework until the very end of the day. Occupying their time with different leisurely activities. They get distracted and start their homework later when they could be getting their much needed sleep. A good tip is to separate yourself from all your devices that deal with social media, as some schools such as St. Edward utilize ipads to do work. In this sense avoiding electronics is almost impossible so you’ll just have to show some self restraint, and think instead of all the sleep you could get if you don’t let yourself get distracted!

Schedule management is very important as well when you’re trying to get enough sleep. As stated before, athletes, and members of other extracurricular organizations have it the worst, as their respective sports take around two hour chunks right out of their day. Having good time management is the key to everything in high school. Without it you’ll be stuck trying to get enough sleep forever. So another good tip to utilize is to plan your days, instead of just “going with the flow”. It doesn’t take much time either; if you could just take five minutes out of your morning to set yourself a schedule each day you’ll be much more organized. Which would help you, in turn, get more sleep.

Sleep is an incredibly important function of the human body; especially for teenagers as they need the most sleep in this stage of their life than they’ll need on any other. As lacking in it may cause you some issues in school, accidents, and even some health issues.