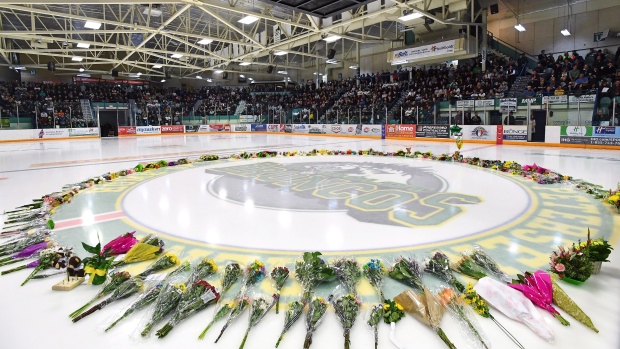 What seem like a normal day of traveling to a game turned for the worst. Humboldt Junior Hockey Team, the Broncos, team bus collided with a semi truck and claimed the lives of 15 players and coaches. They were on there way to a playoff game against the Nipawin Hawks.

Humboldt, a town of 5,000 people have a passion for hockey and are mourning the losses for the players and staff. A memorial was hosted and the team’s home rink. Many laid down flowers at center ice. The Broncos Club President, Kevin Garinger, told people at the vigil, “It’s shocking. The town comes together on game nights. A small town hockey team has touch everyone in the community. The arena focus not just on hockey but a focus of community life.”

Across Canada and the United States, people have been making small vigils for the players. Many have been leaving hockey sticks on their porches as a tribute to the players. The Canadian Prime Minister also attended the vigil.

The NHL, who has 6 teams in Canada, has held moments of silence for the players. Last week, the Chicago Blackhawks and the Winnipeg Jets wore jersey with “Broncos” on the back. Pittsburgh Penguins captain and center Sidney Crosby, who is Canadian, had the whole team sign a jersey with Broncos on the back for the survivors.