St. Edward fashion through the years 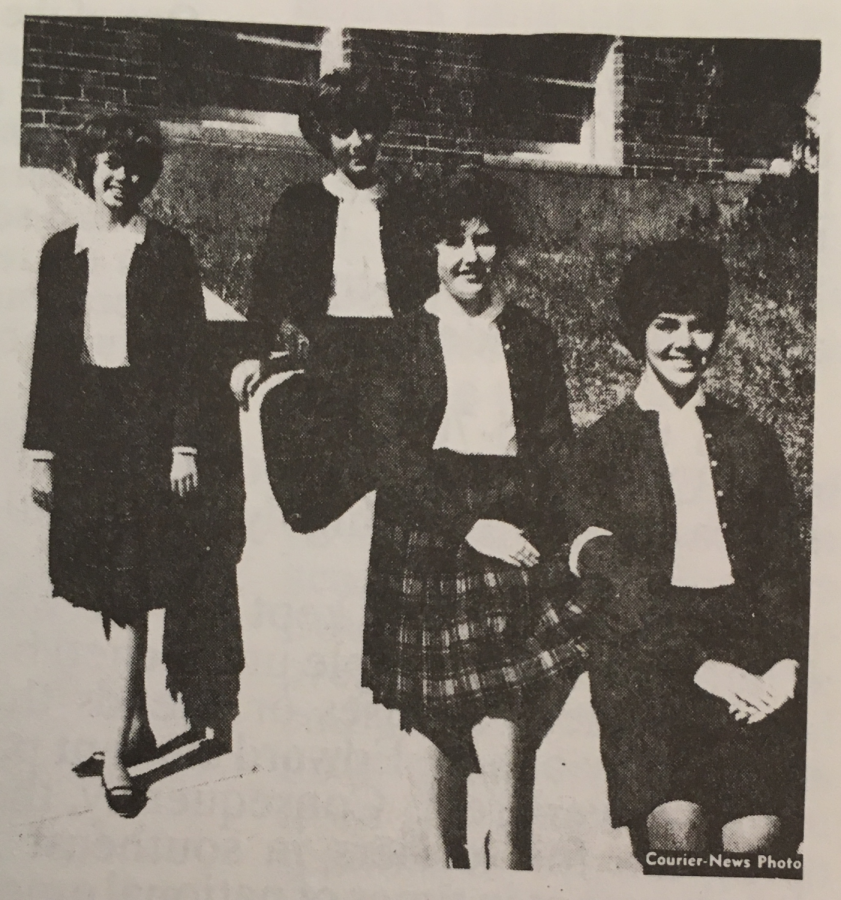 St. Edward High School was founded in 1941 and had an enrollment of 120 students. These students were prepared and ready to set St. Edward historical records for future students! For instance, the importance of fashion is being kept present throughout the years. With a small twist..

From 1941 until 1952 girls were required to wear black-soled Mary Jane shoes with white crew socks. The dress code also required the skirts to be a solid dark color at knee length and their top was of a one style only, a white lapel short sleeve shirt with a dark colored plain blazer—the same color as the skirt.

The boys on the other hand, would dress in a clean, casual way; they would wear long high-rise solid color work pants with a belt, black sole shoes, and preferably a long sleeve dress shirt; either a solid or plaid style. Ties or vests weren’t required but the boys would be allowed to wear these if they desired to.

From the years 1953 to the 1960’s, cardigans were worn for the first time on both boys and girls. The cardigans would include the school letter “E” with their class name, class graduating year, or a St. Edward patch on the right sleeve. These were available in two colors: a light gray for the girls and a darker gray for the boys. During these years, all students had the choice to wear either their blazers or their cardigans.

In 1956 a thin dark colored sweater was introduced for the girls uniforms, meanwhile boys were still allowed to wear any type of casual attire, meaning long sleeve button up collared shirts and ties weren’t mandatory but could still be worn.

In comparison to today’s uniforms, the same rules applied. Starting from the 1960’s, girls were expected to be in uniform at all times. The only thing that changed during these years were the skirts, socks, and shoe policy. The skirts were plaid skirts—a fabric with a pattern of tartan or an imitation of tartan, green and gray with yellow lines. Socks were worn at knee length and had to be of a dark solid color. The last change that took place was in 1964 on the shoes, the shoes were of black sole and could be slip ons or moccasins, although one or two would wear black sole white shoes. As for the boys, in 1966 they had to be well groomed, they were required to wear solid color ties, a belt along with high waisted solid colored casual pants, they also had the option to use either blazers or V-Neck solid colored uniform sweaters, and lastly their shoes were required to be black dressing shoes

“I think that the fact that we have uniforms is a great idea and most likely won’t change here at St. Edward. Uniforms take differentiation out for our students and I know that many other schools are starting to use the uniform policy because it prevents bullying and all this side distraction,” said Athletic Director and l Dean, Mr. PJ White.

In 1999, khaki pants were adopted for every student along with white colored long sleeve oxfords and solid colored ties making them conceive the appearance of prepared young men “ready for business”. Girls were allowed to wear khaki pants as well, but most preferred to use the plaid skirts. Due to several skirt controversies, the girls did suffer consequences. In the early 2000’s, girls were not allowed to wear skirts anymore. It was expected for them to wear khaki pants and a tucked in oxford due to them not being able to follow the rules of how long the skirts should have been kept. Thankfully, this rule didn’t last long because they learned their lesson and the skirts were brought back.

It’s 2018 and at St. Edward High School dress code is still in traditional with Catholic education. According to the St. Edward student handBook, “While fads and fashion in dress change regularly, the school is committed to keeping to these traditional standards.. Students are to arrive to school in full uniform. Students are expected to be neat in their appearance at all times.”

All male students have to adhere to wearing Khaki colored uniform pants and belt with required St. Edward “STE” monogram (girls have the option to wear these as well). All female students are expected to keep following the rules by wearing grey/green/gold uniform plaid skirt with hem line no higher than 1” above the knee.

very Friday, the students are permitted to wear spirit wear, something that is appreciated by the entire student body. Spirit wear consists of any St. Edward approved athletic team jerseys, T-shirts or sweatshirts, club or organization T-shirts, or any top regarding something going on at the school. On Fridays school pants and skirts are still expected.

“I like that we get a break from being in full uniform once a week, we have so many different options of spirit wear for both winter and summer times, I think that if we didn’t have uniforms it would distract kids and cause some sort of competition thing between students. Plus, I don’t have to wake up 20 minutes early, that’s satisfying,” said junior Madalynn Duffy.