Alabama wins National Championship Lead by a Surge of Freshman 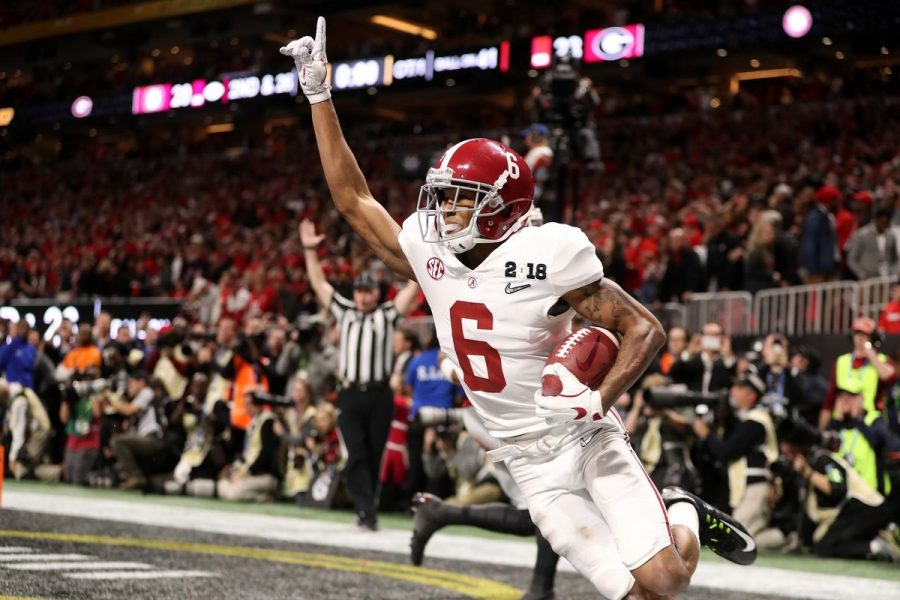 The Tide Rolled in late last night. It came down to two teams from the SEC Conference the Georgia Bulldogs and the Alabama Crimson Tide. Alabama came out with the victory in OT 26-23 over the Bulldogs. The Tide head coach, Nick Saban went into his bag of tricks to win it. Saban unbelievable made the decision to sub out his 2 year starter in favor of his true freshman backup.

The Bulldogs had the first possession of the game. On 3rd down true freshman QB, Jake Fromm threw an interception into double coverage that the Tide picked off. The Tide marched down the field but came up empty on a missed field goal by Andy Pappanastos. The Bulldogs would then drive down the field and hit a 41 yard field goal by Rodrigo Blankenship to take a 3-0 lead. The Tide couldn’t find themselves anything on offense. Sophomore QB, Jalen Hurts threw for just 21 yards on 3-8 passing in the first half along with 47 yards on the ground, but the Tide couldn’t get any points on the board. Georgia would take advantage of the situation and score 10 points on a 27 yard field goal by Blankenship and a 1 yard TD run by Mecole Hardman to put the Bulldogs up 13-0 at the half.

Alabama got the ball to start of the second half and Coach Saban made some personal adjustments. He benched Hurts in favor of true freshman QB Tua Tagovailoa to start the second half to lead the Tide. Not only did he start a surge of hope, he led Alabama to victory.

On his first drive he threw a 6 yard TD to fellow freshman Henry Ruggs III to cut the deficit to 13-7. Fromm would respond on the next drive by throwing an 80 yard TD pass to Hardman to give the Bulldogs a 2 TD lead. Alabama would make a 43 yard field goal by Pappanastos to make it 20-10 to end the third quarter.

In the fourth quarter the Tide awoke and brought it to Georgia. Pappanastos would hit a 30 yard field goal to make it 20-13. The Tide defense would force another pick by DE Raekwon Davis on the Bulldogs and take over with great field position. Tagovailoa would march the Tide once again down the field and find senior WR Calvin Ridley on 4th and 4 to tie up the game at 20-20. The defense would once again hold the Bulldogs offense and have an opportunity to win the game on the final possession. They would get into field goal range with 3 seconds left. Unbelievably, Pappanastos would missed the game winning field goal. The Tide would need overtime to win it all.

The Bulldogs had the opening possession of overtime and were pushed back on a 3rd down sack would make it a tough field goal but Blankenship hit the 51 yard field goal gave the Bulldogs 23-20 lead. The Tide took over and Tagovailoa was sacked on first down and backed up the Tide to the 41 yard line. On the next play he connected on the game winning 41 yard TD pass to DeVonta Smith and the Tide win 26-23.

The win was the Tide’s fifth National Championship in nine years and the sixth for Coach Saban, as he tied legendary Crimson Tide Coach Paul “Bear” Bryant for the most national championship wins all time. Georgia head coach Kirby Smart joins the rest of Saban’s former assistants to fall to their former boss. He was the defensive coordinator for the Tide defense on the 2015 national championship team.