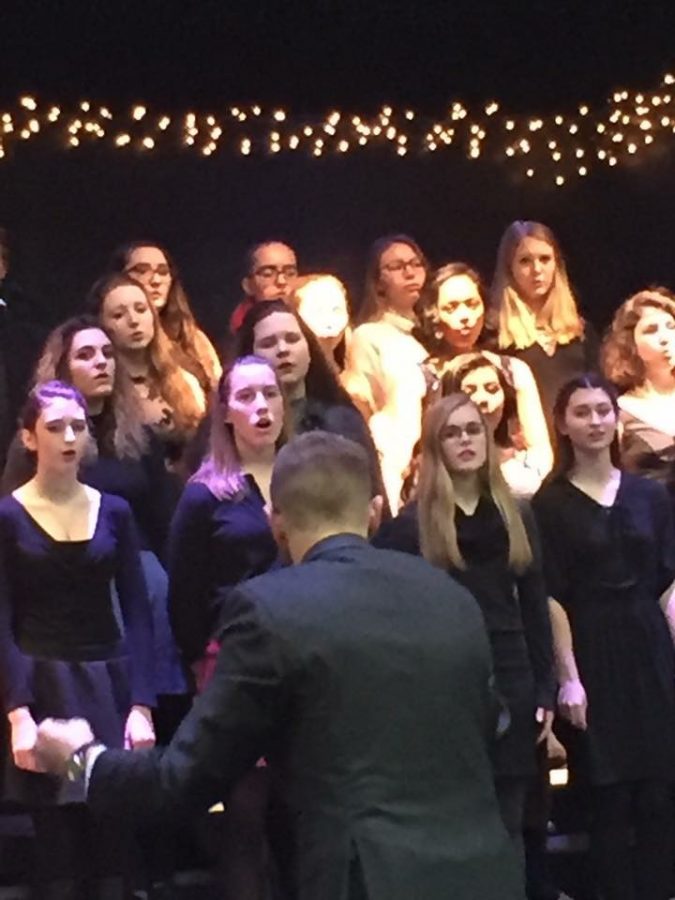 The St. Edward’s Choir has been thriving as of late. This year they have a total of 35 members split into two groups. Vocal Jazz Ensemble which is the more advanced group and Concert Choir.

Choir director, Mr. Jones, says that he enjoys having two groups because he is able to teach different styles as well as expand the school’s knowledge of music as a whole. When asked what songs we should keep an ear open for, he said “For Vocal Jazz Ensemble, Christmas Benediction and for Concert Choir African Noelle”.

Last year, the Choir had an astonishing 60 members, Mr. Jones says the drop of members is due to 9th hour choir being discontinued. However, it was truly a blessing in disguise. Mr. Jones says that his favorite thing about teaching choir this year is, “ The fact that all of the students chose to take the class, they wanted to be in the class. That elevates the effort, that elevates the energy, because it’s an elective students choose to be in my classroom. The eagerness and drive in terms of being great and learning to be great is really fun.”

The effort by the choir is not going unnoticed either. Last week, Mr. Jones had three students advance in the ILMEA District Auditions.  Lizzie Kopaz and Lourdes Galido both advanced to the State Auditions. The choir is also getting ready for the annual Metro Suburban Conference Choral Festival. This year the event will be hosted by Walther Christian on November 16 at Concordia College.

The key to the choir’s success has been Mr. Jones. After being hired as the music director in the fall of 2011, Mr. Jones has grown his choir from ten students to last years peak of 60 students. Last year, the choir was remarkable and very well liked by all of the student body. In fact, in a recent poll, taken by 31 students Mary Did You Know was voted the favorite song with 15 votes and Trading My Sorrows not far behind with 13 votes.

As for the future of the choir, Mr. Jones says that his goal is “To maintain a level of integrity in terms of young musicians. To keep a level of musicianship and have students still learning while making music rather that just learning how to sing songs.” He also adds that, “They are a great group and any chance you have to come see us you should.”