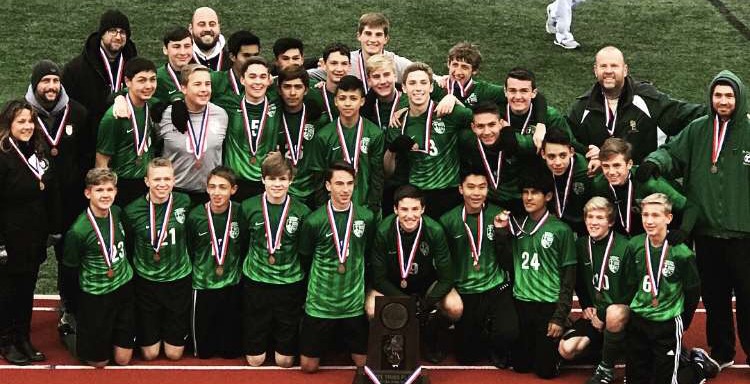 On Oct. 27, the Green Wave soccer traveled to Peoria, to take on Monmouth-Rosevelle in the state semi-final match. Unfortunately, the Green Wave did not advance to the State Championship; they lost in a close match 0-2. The next day, the team played in the consolation match for the third place title. In their last game of the season, the boys came out on top and took home the third place trophy with a score of 4-0.

The season was filled with exciting games and challenges for the Green Wave. On Sept. 24, the St. Edward varsity soccer team defeated Lincoln Way Central (3-0) to improve their record to 18-0 and win the PepsiCo Showdown Championship. They were the smallest school to ever win the PepsiCo championship, which is the largest high school soccer tournament in the United States. During halftime, there was a surprise ceremony involving the contest that the amazing St. Edward fans won against five other teams: Lincoln-Way West, Saint Patrick, Bulls Prep, Waukegan, and St. Charles North.

Buddy’s HELPERS is a nonprofit organization uniting Chicago-area high school students in a community service campaign built around “Making a difference on AND off the field” to achieve leadership for a stronger future. St. Edward was presented a $3,000 check,  which was donated to the Lungevity foundation, because we were winners of the “Battle of the Fans” contest.

The boys advanced into the Sectional final after a 5-2 win on Oct. 18 against Rockford Christian. On Oct. 21, the Green Wave beat conference rival Aurora Central Catholic with a nail-biting score of 3-2.

To advance to the final four, on Oct. 24, the team competed against Francis Parker, for the Super Sectional crown.  The team defeated Francis Parker with a score of 2-1.

This season has been historically successful for the Green Wave team. They have broke a number of team and individual records this season. The team as a whole broke the record for the longest win streak in St. Edward history, and they have had the most wins any soccer team at St. Edward has ever had. Senior AJ Franklin shattered the record for most goals scored in his career with 139 goals, 70 goals this season alone. Unfortunately he fell short of breaking the state record by 1 goal. Franklin was named captain of the all-area team by the Daily Herald as well. Sophomore Josh Johansen broke the record for most assists in a season with 43.

Coach Tim Brieger coached his 1,000th game during this exceptional season as well. After securing third place, Brieger told the Daily Herald he couldn’t have been prouder of his guys.