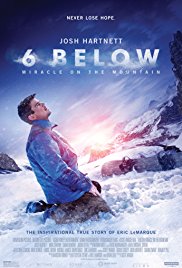 6-Below: Miracle on the Mountain

6-Below: Miracle on the Mountain is a movie from the studio: Momentum Pictures. It is the story of a former hockey player Eric LeMarque who gets stranded on a mountain during a snowstorm for eight days. He soon starts to face the past and his inner demons while fighting for survival and starts to rediscover his faith. The movie stars Josh Hartnett (Eric LeMarque), Austin R. Grant, and Jason Cottle. Personally, I probably won’t be able to see this movie, but it certainly sounds interesting. It sounds similar to The Revenant in some ways and the Hoth scene from Star Wars: The Empire Strikes Back in other ways. 6-Below: Miracle on the Mountain comes out October 13, 2017 and is rated PG-13.