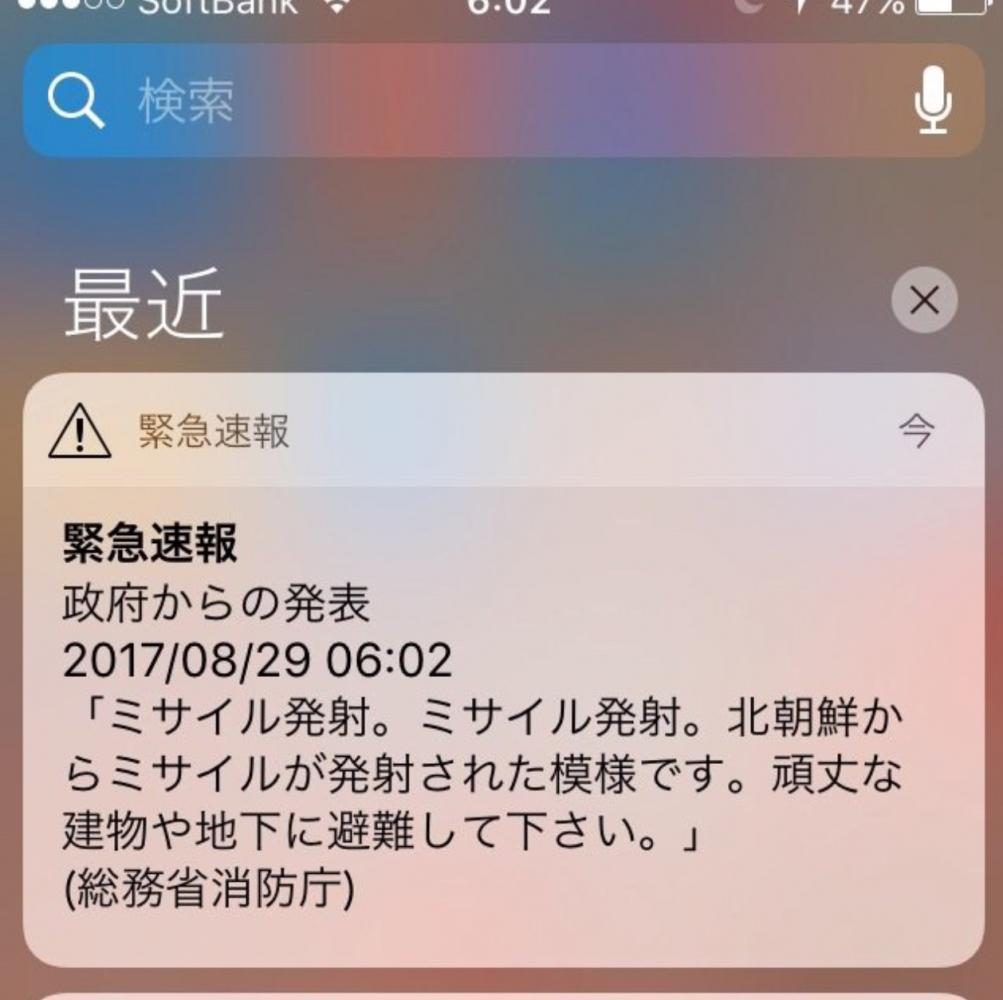 J-Alert that was sent out on Monday morning stating to get to a low floor because of the launched missile.

On September 4, students of a high schoo in Hokkaido gave their opinion and thoughts on the North Korean missile launched into the sea near their home town of Hokkaido. “The siren woke me up…it was so early. I was so confused and I naturally looked to my phone. I honestly did get a bit nervous when I saw the J-Alert,”  Shuntaro said, explaining his reaction after Tuesday’s events.

“Really? I thought it was troublesome. All the trains were delayed so I was late for school, it was more annoying to me than scary,” Kenta said, seeming unfazed buy the past events.

“My parents woke up and my little sister was crying, I started crying too before I knew what was going on” Yukine laughed as he discussed his thoughts with his classmates Shuntaro and Kenta.

J-Alert is a system used for warnings such as weather that are sent to local media to alert citizens which are broadcasted in five languages: Japanese, Korean, Mandarin, English and Portuguese. “I got five J-Alert notifications on my phone but they were all silent, I thought that was a little weird. When I read them I was really surprised but I wasn’t expecting it to actually happen so I was able to sleep comfortably after. I feel like I should be more worried about North Korea, but they have been causing trouble for so long it’s gotten tiresome. It’s almost like living next to loud angry neighbors who throw stones at your house to get you attention; I just can’t take them seriously,” said Shuntaro.

Around the time of August 15, which is the Korean Independence Day, North Korea has a reputation of creating more of a disruption than usual to get attention. Kenta explained, “Every year is almost like a guessing game around Korean Independence Day, like we always try to guess what they’re gonna do this year. The old people don’t like when we joke about North Korea though, they always say we’re gonna regret it.”

Although some Japanese seem unfazed by the recent activity by North Korea, some are taking action to protect themselves. Kenta’s parents, as well as many others I talked with, are considering buying a bomb shelter . “I heard my parents talking about where to buy a bomb shelter, I thought ‘ah my parents are too weird’, but I heard some townspeople saying the same thing the next day. Don’t you think they’re taking it too far?” This took them by surprise as Yukine and Shuntaro became silent, this seemed to hit them that maybe this is more serious then they were treating it.

How is knowing that a missle could be launched into your country and potentially your region affect the way Japanese citizens go throughout their day? “Just because of this threat doesn’t mean I’m going to live my life in fear or any differently, that’s what that crazy guy wants and I’m not going him that,” Shuntaro said as the other two agreed.