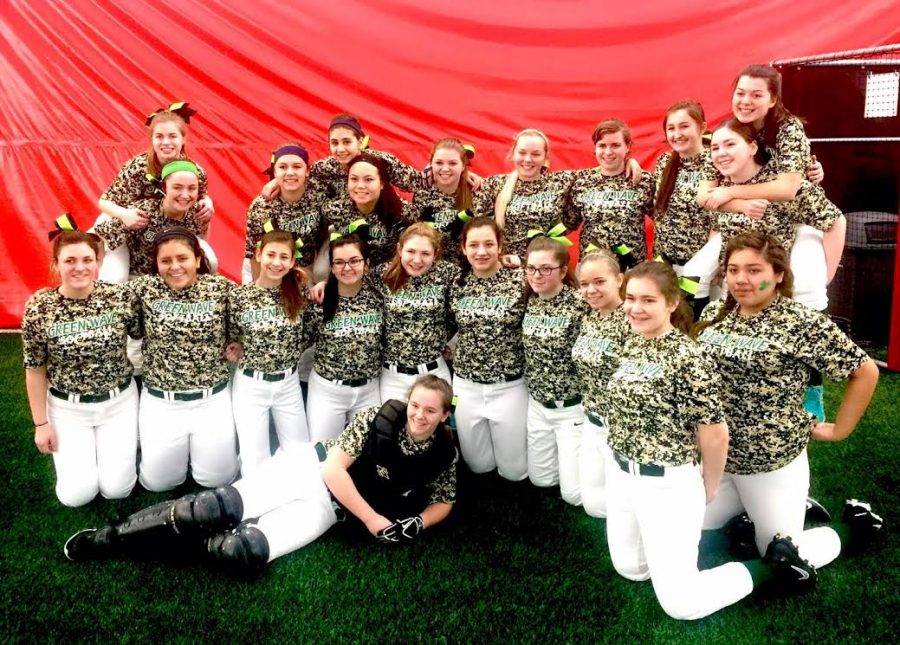 JV and varsity softball players pose after a game in Peoria.

After finishing 22-7 last season, the St. Edward softball team returns, featuring seniors Jackie Boydston, Emily Stapay, Devyn Ernst, and Kaitlin Freeman. Last season, the varsity team qualified for the Final Four IHSA Class 2A Tournament and came in fourth place in the state. This season, the team was moved from Class 2A to Class 3A, which means the competition in regionals and sectionals are expected to be much tougher. However, this season looks promising for the varsity team, and expectations are high after last year’s successful season. “It will be hard to replace last year’s seniors, but we are returning six starters, and look to be potentially as good, if not better, than last year,” said softball coach Paul Netzel, who was new to the St. Edward softball team last year. “The team was moved up to 3A, which will provide a bit more of a challenge.”
Six starters are returning from the 2016 State-qualifying team for this season, but the team has big shoes to fill after the graduation of Division I talents such as Lindsay Zdroik, who earned a spot at Valparaiso in Indiana. Sophomore Jessy Kramp is expected to emerge as a top area pitcher and Emily Stapay should provide some much needed experience on the mound.
New this season is a recently added JV team of eleven players, who will be traveling with varsity. The new JV team will also be playing in their own designated JV games, which will be announced.
The entire crew traveled down to Peoria, Illinois, to start the new season. Varsity kicked off their season in a three-game tournament against Peoria Notre Dame, Benet Academy, and St. Viator. The girls did not come away with a win but rallied in all three games to overcome early deficits. Junior Mallory Rejman said the tournament was a really good experience for the team before the start of the conference season so they can get to use to playing together against very good teams. “I think I’m expecting a lot of the younger girls to step up and help out so we can be as strong as we were last year!”