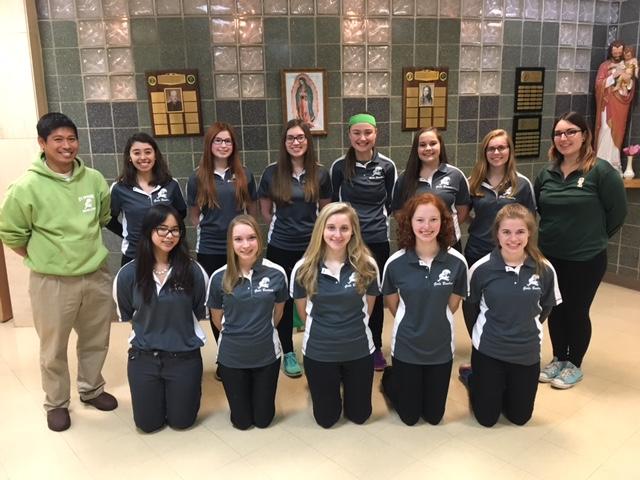 Winter sports season is now in full swing, and that means things have been rolling at Elgin Lanes with the St. Edward bowling teams! This year’s girls team is being coached by Mr. Anastacio, a former math teacher at St. Ed’s, and is made up of 12 girls. This season, their goal is to get the whole team to sectionals. So far, things have been going well, the team being 9-2 so far.

The girls celebrated their senior night on January 18th, with a win against Westminster. Giovanna Gutierrez, the captain and founder of the St. Ed’s girls bowling team told us, “It’s really cool how much the team has grown this year, it’s sad that for many of us it will be our last year bowling, but we hope that it will continue growing. We’re working on getting those eight-marks and making it to sectionals as a team”. Gutierrez referenced eight-marks, which is getting at least eight strikes and/or spares in a game, which makes you more likely to get at least a 150, a score that each member of the Lady Wave team hopes to meet. The girls are working hard to reach their goals, and will participate in sectionals on February 4th.

This year’s St. Edward boys bowling team is made up of 13 boys, and coached by Mr. Wunderlich, a Spanish teacher at St. Edward. The team finished the season last week. The highest score on the team was set by senior Dominic Hartke, with a 234 during regionals. The boys have been working hard all season, while also having a ton of fun. On January 14, the boys bowling team competed in regionals, against other schools in the area. Although they did not advance as a team, Dominic Hartke, a senior bowler, is advancing to sectionals. Boys bowling sectionals is on January 21st in Vernon Hills at Hawthorne Lanes.