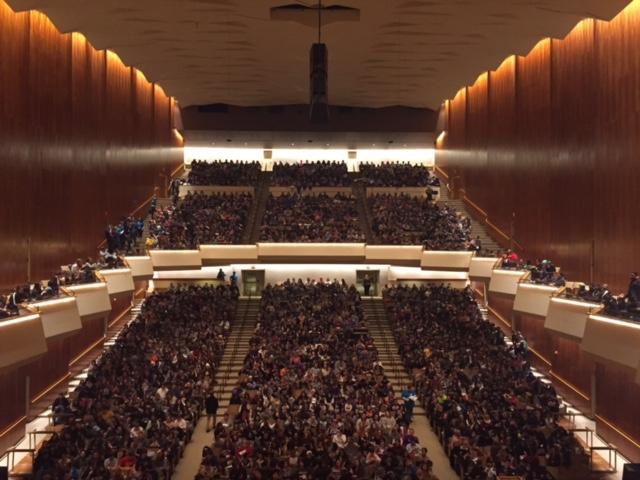 On a cold day in January last weekend, some of our own St. Edward students embarked on a journey that took them to the University of Illinois in Champaign to participate in Theatre Fest. This is an annual festival that draws over 4,000 high school students from around the state of Illinois who are interested in theatre. This year, St. Eds took 19 students, both juniors and seniors, who are part of the Thespian Society. The trip was led by Miss Rodman and Mr. and Mrs. Haeflinger.

At Theatre Fest, students were able to experience a variety of shows and participate in a wide range of theatre-related workshops. St. Edward students saw shows such as In the Heights, The Little Mermaid, and a theatre group from Chicago known as the Neo-Futurists. Allison Kraus, a senior at St. Eds, said “I couldn’t believe the performances were by high schoolers, they seemed like professional performances, especially In the Heights.” In the Heights was a fan-favorite, written by Lin-Manuel Miranda, the author of the immensely popular stage production, Hamilton. It told the story of a Hispanic neighborhood in New York and their ability to come together as a community. The show, put on by Wheeling High School, was amazing and enjoyed by all.

In between shows, students were able to participate in workshops to help further their theatre knowledge. The Edge’s own Charlie Canning and Kyle Brown went to a one-of-a-kind workshop uniquely named “Catfart”. The “Catfart” workshop taught the foundation for low comedy such as The Three Stooges.  Kyle Brown referred to the workshop as “some of the weirdest stuff ever, it was awesome, it was amazing, crazy, and indescribable.”

The students braved the cold, walking around the large University of Illinois campus in single-digit temperatures to learn about and enjoy all the aspects of theatre with fellow thespians. ­­­­­­Gabrielle Grinnell, a senior at St. Eds, said “I loved the enthusiasm of the overall festival, it seemed as if everyone was equally as excited to be there as I was.” The trip was a great success, and a great opportunity for high schooler students to experience theatre together.