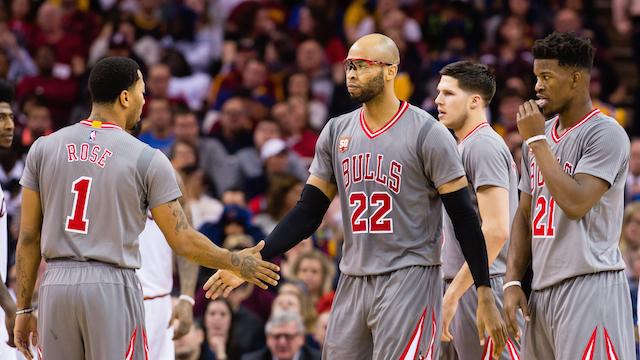 CLEVELAND, OH - JANUARY 23: Derrick Rose #1 and Taj Gibson #22 of the Chicago Bulls celebrate after scoring during the first half against the Cleveland Cavaliers at Quicken Loans Arena on January 23, 2016 in Cleveland, Ohio. NOTE TO USER: User expressly acknowledges and agrees that, by downloading and/or using this photograph, user is consenting to the terms and conditions of the Getty Images License Agreement. Mandatory copyright notice. (Photo by Jason Miller/Getty Images)

When the Chicago Bulls TV ratings go down a total of 29% since last season, in one of the biggest sports markets in the country, you know there’s a problem. The Bulls have had many heartbreaking injuries and tough stretches in recent history, but fans were faithful and still watched. What’s different with this season?

Fighting for a playoff spot is the Bulls’ biggest struggle right now. Sitting currently at the eighth seed in the East, with barely over a .500 record, the fans are scared for their team.

There is a problem with the Bulls, and there’s more than one. Well, just to start, injuries to key players have plagued the team.  The starting lineup hasn’t been fully in tact more than a handful of times this season.

No one on the team knows how to properly defend. Former head coach Tom Thibodeau (relieved from his job in favor of first year NBA coach Fred Hoiberg), thought defense was the most important thing in the game, but this team has really shown that the Bulls lack fundamental defensive skills. They show no effort on “D”, don’t play help line, and they only have one player, Butler, who can defend almost anyone.

Why is it that the Bulls don’t play defense? Maybe it’s that they just take their time up and down the court, they complain on every no-call, and they just don’t care!

Watching the Bulls in the past, they have always shown great heart with a push to win and finish games. This season they lack that heart, effort, and the drive to win games. “It’s all about effort,” Derrick Rose says, and that is something the Bulls are clearly missing. They rarely have strong starts, don’t know how to finish games and they play lazy.
The Bulls have made watching their games very hard for fans. The faithful fans might stay, but the Bulls will have to step up, or their post season will be very short this year. This season is shaping up to be a complete failure for everyone, from owner Jerry Reinsdorf and front office duo Gar Forman and John Paxon, to new head coach Hoiberg and every single player who has stepped on the floor. Although Forman told WSCR AM670 reporter David Shuster they were “very active” at the trade deadline, they failed to make any significant moves or free up much salary cap space. They deserve to hear the boo’s.  Things haven’t gotten better since the All-Star break – in fact, they’ve gotten worse in some ways.

Sure, there are more injuries. Rose seems to have an injury every other game and that’s just the start. Noah is out for the year, likely going to be traded in the off season.  Gasol, Butler and others have sat out significant time. Then, after Hoiberg demanded the team perform better in mid March, they went on to lose 8 of 11 games, including an embarrasing blowout loss against Washington 117 – 96 on March 16.

This team clearly needs rebuilding.  The offseason better be a busy one for Forman and Paxon, and even then, they may have trouble earning the trust of the fans again.