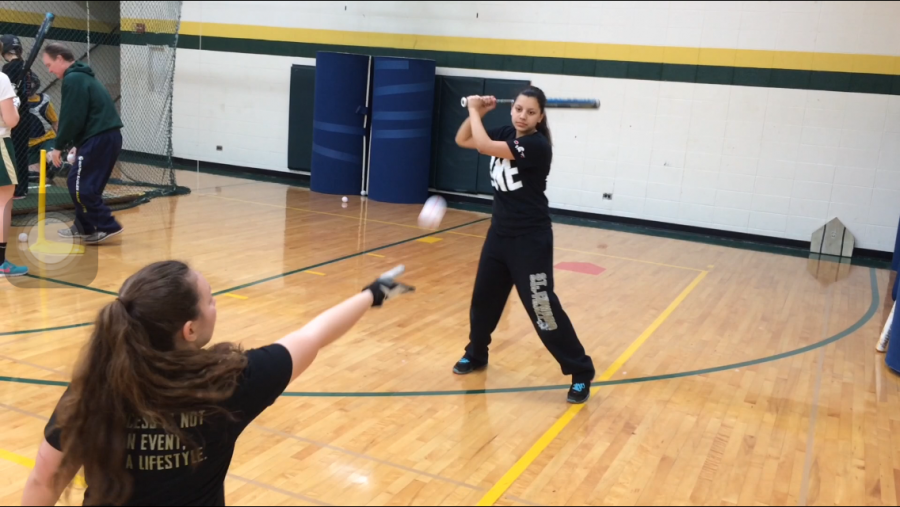 After finishing 21 – 8 last season, the St. Edward softball team is back with returning seniors Lindsay Zdroik, Allison Stratman, Rachel Lesh, and Clarissa Vargas.  The team also welcomes new playerss including Lindsey Mauritzen, Sarah Medoza, Katyln Davidson, and Jessy Kramp.  This year looks promising with four new players and four passionate seniors to learn from.
“We learn a lot every year.  We’re both excited and sad to play our last year at St. Ed’s and we will miss our teammates as much as we loved playing with them,” said two of the team’s co-captains Lindsay Zdroik and Allison Stratman.
When the team was asked about some of the adjustments that they are working on to improve and Clarissa Vargas commented, “We would have trouble hitting the different pitches other teams had to throw at us, so that’s something we  are definitely improving on during our practices.”
The team will play 13 of their 27 games this season at home, at the Elgin Sports Complex.  With Coach Paul Netzel, new to the St. Edward softball scene, the team is excited to begin their quest for a regional championship.  Last year, the Lady Wave lost in the regional final against rival Glenbard South.
The seniors have some pretty lofty goals for the season, but are also looking forward to the next steps in their softball careers.  Zdroik earned a well-deserved spot at Valparasio in Indiana, a Division I program. Stratman will play softball at Kenyon, a college with a prestigious academic reputation.  Vargas plans on continuing to play softball, but not at the college level.  Lesh hasn’t fully made up her mind but she says she will most likely continue to play the sport in one way or another.